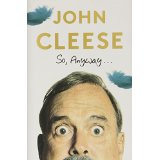 John Cleese may not technically be a Baby Boomer (he was born in 1939) but his entire life’s work reflects the Baby Boomer’s credo of challenging the status quo and turning the mirror on our idiosyncrasies. I read his new autobiography, “So, Anyway” with a smile on my face the whole time. Not because every line was a joke but because I understood and appreciated his evolution. The book was a joy to read and reminded me very much of David Niven’s The Moon’s a Balloon” written many years ago.

As the only child of an anxious, detached mother and a loving father, Cleese’s early years were marked by delayed maturity caused by spending most of his early life in boys’ schools with hardly any exposure to girls and women. As a result, he was awkward and misguided about how to become involved in and maintain healthy relationships with women. One particularly tender part of the book was his description of losing his virginity while touring New Zealand with a troupe of BBC performers. Unlike today where young people are blasÃ© about their sexual experiences beginning at a shockingly young age, those of us growing up in the fifties and sixties were more circumspect about this big step. He was nearly twenty-five when he was invited by a lovely young woman to experience carnal delights for the first time. When he met the woman again in 2006, he was still awed by how special and memorable he remembered the experience more than fifty years later.

Like many Boomers, John Cleese bumbled along in his early years with no great ambitions to become what he ultimately became, which is one of the great humour writers and performers of our time. As part of the Monty Python troupe and as an individual performer, John Cleese has created some of our most memorable points of reference for contemporary humour. I’ve always been a huge fan of British humour with its brilliant use of irony and reading this book helped explain how it was born and grew in spite of the perceived uptight attitude of British society.

Cleese dedicates a fair amount of print space in his book to his school years including grammar school, public (high) school and university at Cambridge. These experiences would be of particular interest to teachers who read the book because he was strongly impacted by his teachers, both in terms of their effect on him and the effect the profession had on their individual personalities. He recalls a particularly beloved teacher whom he felt was very poorly served by an egotistical university professor who utterly crushed the spirit of the teacher when he was a young man. Many of his experiences were fodder for later comedy sketches.

As I read the book I found myself thinking that the career path that developed for John Cleese resembled that of most Boomers, that is, there was no grand plan. He had an aptitude for and studied maths and sciences but for various reasons was forced to switch to the study of law when he entered university. Not being particularly ambitious or talented in any obvious way, he simply followed the path of least resistance and life happened. Like so many of us Boomers, he simply wanted to graduate, get a job at a bank and get on with life. There was none of the intense aptitude testing, career counseling and specialized academic channeling typical of today’s young job seekers. 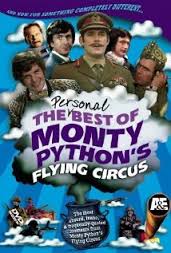 As I finished the book, I was struck by how much he did not cover and can assume perhaps there’s going to be a sequel at some time. Cleese has been married several times and mentions only his first wife, Connie Booth with whom he co-wrote and starred in Fawlty Towers. He also makes no mention of his lucrative work in the seventies producing and starring in a series of motivational business films such as Meetings, Bloody Meetings or Close the Sale. The book covers his work until the end of his Python years, then jumps ahead to their reunion show in 2014.

So, Anyway was an enjoyable read. There’s plenty of anecdotal material about such British entertainers as David Frost, Peter Sellers, Harry Secombe, Ronnie Barker, Ronnie Corbett and of course his Python co-stars. His has been a life well-lived and I’m so glad he shared it with us. And on that note, here’s one of my favourite Python sketches: https://www.youtube.com/watch?v=IeXMKygwSco