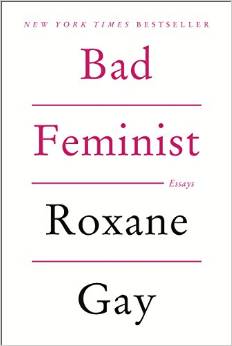 Bad Feminist by Roxane Gay is a current New York Times Bestseller. I was drawn to reading the book because the format appeared to resemble many aspects of my own book, BOOMERBROADcast. The book is a series of personal essays sorted into categories that reflect the author’s opinions on a variety of popular topics, such as, movies and television, books, racism, classism and of course, feminism. Call it research. I purchased the book to see what made Gay a New York Times best-selling author while I am not.

Roxane Gay is a very complicated lady. Born in desperately poor Haiti, she moved to the United States with her parents where she grew up, often living in predominately white communities. Despite being among the brightest in her class she was marginalized because she was visibly different from her classmates, with bad hair and a quirky personality. Whatever constituted her difficult early life, the result is a complex mix of intelligence, anger, conflict and drive. From playing Scrabble to achieving academic excellence, Gay is driven to prove herself the best of the best.

My copy of Bad Feminist is full of yellow highlighter marks and Post-It flags. The author proffers some insightful observations on current issues, for example:

Citing several examples of bad behaviour by celebrities and professional athletes, she says, ““We live in a culture where athletes are revered, and overlooking terrible, criminal behavior is the price we are seemingly willing to pay for our reverence.” This behaviour should be treated as unacceptable and if necessary, criminal regardless of the offender.

Heterosexual men really do have advantages not shared by women or the LGBT community. “Heterosexuals take the privacy of their sexuality for granted. They can date, marry, and love whom they choose without needing to disclose much of anything. If they do choose to disclose, there are rarely negative consequences.” Why should anyone other than heterosexuals have to “come out”? It should be a non-issue.

Drawing parallels with my own humble book may sound egotistical. I’m neither as educated nor as smart as Roxane Gay but I agree with her opinions on many issues and disagree on many. I do not, however, bear the burden of anger and indignation she does. But she’s still only in her thirties and at sixty-seven I’ve now worked through most of my shit. When Baby Boomers were her age and at her stage in life, we were also searching for justice, fairness, reward and answers. That’s what the journey of life is all about. It eventually gets better, much better, but life will never be fair nor easy. That’s not to say we shouldn’t keep fighting for feminism and other causes that are simply right.Â  In my opinion, however, Bad Feminist is more about racism than feminism but any “ism” is undoubtedly something that needs attention. And I still do not know why Bad Feminist is a New York Time Bestseller and mine is not. Perhaps you could enlighten me.