Can houses get COVID-19? They must because our home is collapsing around us. Well, not the house per se, but all the gadgets and equipment that keep us functioning. Everything we own is contracting a virus at a rate that would have Dr. Fauci retreat to his ‘safe room’ and never come out. I recently wrote about our month-long, expensive dryer fiasco (What do you do when your dryer is condemned to landfill?). That was just one in a prolonged series of equipment failures that are driving us batty.

The first thing to go was the faucet in the shower. Actually, we barely noticed its slow death over the years until the effort required to turn the lever on without hearing major crunching and grinding became too alarming. Something was obviously wrong so we broke down and called in a plumber who effortlessly replaced a simple cartridge in the faucet, handed us a huge bill, and twenty minutes later he was gone. Now, every time I turn on the shower, I burst into giggles, delighted with the silky-smooth efficiency of our shower lever. Wow! It doesn’t take much to make this old boomer happy.

Next, on one of the hottest days of the summer so far, our air conditioning system died. I spent more than an hour on the line waiting my turn for someone to take our call and inform us that it would be a week before they could get a technician out to our house. I need to qualify this issue by stating that last year we purchased a very expensive ($66.00 per month) supplementary service and repair contract with Enercare that we hoped would result in premium service. Hah! No such luck. After a week of me and my honey sweating it out, the technician finally arrived and solved the problem.

A couple of weeks later, I received an email from Enercare reminding us that it was time for our (off-season) furnace service call. Thinking summer would be the perfect time to get our furnace serviced as those guys definitely wouldn’t be too busy at this time of year, I made an appointment for a week later. The day before the appointment, I received another email from Enercare advising us that our appointment would have to be deferred because they were so busy with priority air conditioning calls. We sure as hell weren’t a priority when our system was down a couple of weeks earlier. You can’t win.

Then, the strange virus struck again. Hubby lost one of his hearing aids. He figures it flew off when he was removing his face mask and we’ve never been able to find it. We once had a former dog eat one of my hearing aids, but that’s another story. The device was gone and at a cost of several thousand dollars for a replacement, this was not a frivolous loss. Ever in denial about his hearing issues, he decided to soldier on with only one hearing aid, which this week also succumbed to COVID-19. Two new hearing aids. Kiss several thousand more dollars goodbye.

It’s not over yet!

These issues pale, however, compared to our ongoing issues with our Bell television and internet service. Ever since we’ve lived in this house (ten years now) we’ve had ongoing issues with the street cable delivering a weak signal to our house. Apparently, there’s a fault in the outside line somewhere and at least once a year the signal diminishes from half-signal to zero. It usually takes numerous calls to the call centre and multiple visits by various technicians with different skill sets to stick a bandaid on the problem and restore our service.

Because of lockdown restrictions, we’ve been confined to quarters and television is the lifeblood of my husband’s life. We endured four days of no television and intermittent internet service so we were both going a bit squirrely. Hubby was bored and cranky and not terribly receptive to my gentle suggestions that he read a book. It works for me. As a result, though, our lawn and gardens are now one hundred percent weed-free and we can boast not a single blade of crabgrass. Unfortunately, he missed four days of up-to-the-minute updates about Trump’s screwups which we count on to keep his heart rate up. Withdrawal can be painful. We had a big celebration when the nice Bell guy finally got us back in service after two technicians worked all afternoon at various terminals on the street.

In fairness to the virus, I should probably discount an earlier technical issue with my television which I’m embarrassed to even tell you about, but we’re all friends here. My honey and I watch separate televisions (for obvious reasons, i.e. sports) with headphones so we don’t hear the other’s programs. One day my headphones died and refused to be resuscitated, despite all efforts. I ordered a new set, and with a little help from son and grandson, got them installed. A problem arose, however, as soon as they departed, when I discovered I couldn’t control the volume or turn the television on or off with the TV remote. I had to do it manually on the side of the TV. That’s odd, isn’t it? I put up with the inconvenience for a month or so because I was so fed up with malfunctioning electronics I couldn’t emotionally deal with trying to rectify the problem. When I finally gave up and sought professional help, it turned out I’d placed the receiver in front of the sensor on the front of the TV and that was why the remote control wasn’t receiving On/Off or Volume signals. My stupid. Not the fault of the virus.

Now that COVID has infected most of our household appliances and gadgets, I’m wondering what could possibly be next. Our roof should be good for another ten years, but I wouldn’t be surprised to look up one day while I’m reading the morning paper and see drips from our kitchen light fixtures. Nothing is safe. How much longer will it be before my laptop screen turns irretrievably black except for a strange FU message. We rarely get into our vehicles to go anywhere these days or they too would probably be flashing “Urgent Service Needed” on the electronic dashboard.

The message here, mès amis, is you don’t have to worry and wonder about whether COVID-19 is transmitted through air particles, touch, or via family pets. I can personally confirm its insidious tentacles penetrate every molecule of our lives including household appliances and gadgets. If my iPad mini dies, I might just have to pack it in too. Being able to download library books has been my lifeline. I’ve been mainlining fiction, murder mysteries, non-fiction, and biographies for so long I don’t think I could carry on if I couldn’t read. Thank goodness my optometrist is once again open for business in case my reading glasses mysteriously self-destruct. Plumbing, washer, dryer, air conditioner, television, internet, electronic toys—no object, device, or service is safe from the pandemic. Trust me. I’ve lived it and so far I’ve survived. Be safe out there my friends. 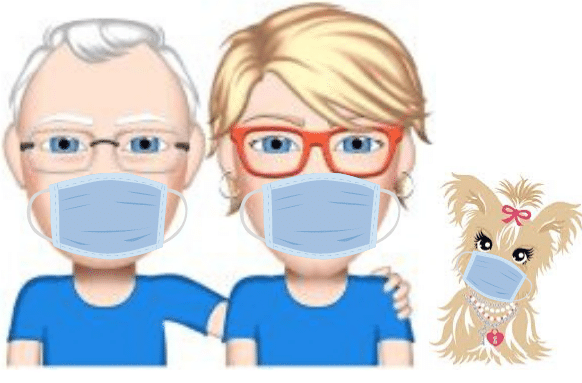 I am always delighted with your ranting, even though it is driving you crazy.

What’s that saying “when it rains it pours”, or everything “ happens in 3’s”.
You have surpassed that and more!

After the first “three” breakdowns, I joked about the next three. Shouldn’t have done that. Thanks, Deb.

Love the family portrait at the end 💕. Your experiences sound first world painful and frustrating. We can always go back to rabbit ears, land lines and paper books….. remember the good old days when ma Bell was reliable and a business person actually answered the phone!

They definitely are first world problems. We’re so dependent on our gadgets. Thanks, Gail.