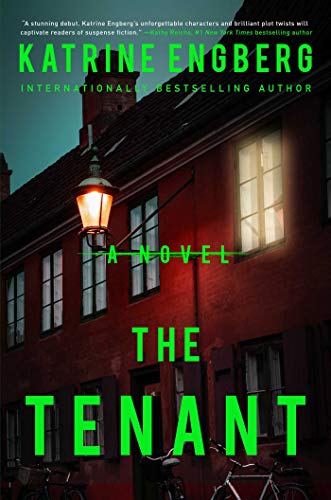 Several things appealed to me about reading The Tenant, a novel by Katrine Engberg. First of all, I’m a recent convert to the murder mystery genre and I love the escapism these books offer. And, one of the main characters has taken up writing in retirement. Also, the story is set in Copenhagen, a city I last visited as a twenty-year-old in 1967 when I was touring Europe on a Eurail pass.

Novels set in a foreign country are the next best thing to getting on a plane and going there, especially when the author paints a vivid picture for us. Plus, it’s kind of a story within a story. One of the main characters in The Tenant is a writer of murder mysteries whose current piece of fiction becomes reality. How’s that for good reasons to read this book?

Esther de Laurenti is a retired teacher and aspiring mystery writer who lives in the fourth-floor apartment of a building she owns in Copenhagen. The third floor is occupied by an elderly man who lives alone and is not in contact with any of his three children. Two young women recently moved into the second floor, and two gentlemen run a coffee shop on the main floor. There are the usual irritations between tenants such as too much loud music from parties but generally, life is pretty uneventful at this address.

Then, one morning, as the older gentleman on the third floor is going down to put out his garbage, he notices the door open to the girls’ second-floor apartment. When he checks to see if they are OK, he discovers a badly mutilated body lying on the kitchen floor. The police investigation team assigned to the murder case is headed by Jeppe Kørner, a seasoned detective, and his partner Anette Werner who is younger and seems to have a knack for annoying the veteran Kørner.

When they begin investigating the case, it becomes evident that the circumstances surrounding the murder of the young woman mirror the plotline that is being developed in a fictional murder-mystery book being written by the building’s retired owner, Esther DeLaurent. Esther can’t understand how someone could have co-opted her story and turned it into reality. As the investigation swings into gear, Esther’s best friend, a young theatre dresser who spends a lot of his time in her apartment is also murdered.

The secret to a good murder-mystery lies in the author’s ability to present all kinds of possible suspects that the reader must mentally sort through and try to figure out whodunnit. Just when we think we have it nailed, she introduces another minor plotline to throw us off the scent and we’re forced to rethink our conclusions. Engberg does this rather well. On the surface, the murder of Julie Stender, an ordinary young woman doesn’t seem like a particularly original target for a plotline, until we learn about the young woman’s background and family connections. Then it gets complicated.

Just as Stieg Larsson’s books like The Girl With The Dragon Tattoo and others are set in Sweden, Engberg’s Copenhagen setting makes for an interesting visit to a major Scandanavian city. We’re introduced to the physical landscape, what the characters wear, what they eat and we get to go along on jaunts to rural locations and talk to people who further colour our perceptions of the storyline.

Through her Esther de Laurenti character, the writer describes her work. “Writing a murder mystery is like trying to braid a spiderweb, thousands of threads stick to your fingers and break if you don’t keep your focus.” That’s an excellent explanation of taking the reader through the story as well. I became invested in each character and enjoyed the tricks and distractions she placed in the plotline to confuse me and keep me engaged. The Tenant is a fun read and the ending makes the reading worthwhile.

If The Tenant by Katrine Engberg is not available at your local bookstore or library, click here to order. (Note: I have now set up an affiliate account with the Canadian branch of Amazon which means you can order in Canadian dollars which makes local shopping easier.)

My favourite genre. I’ve just put a hold on it at the library. Thanks.

I returned it a couple of days ago, so that should move you up the list.