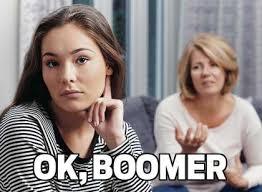 There’s a lot of buzz these days about a new expression aimed at trivializing the opinions of baby boomers. Generation Z (born between 1995 and 2010) is apparently getting sick and tired of being derided and put down by our generation. They think we’re old and irrelevant so they’ve coined the phrase “OK, Boomer” which infers a dismissive “Whatever!”  Many boomers and others have taken great offense to this expression as being insulting, ageist and discriminating. I’m not sure I agree. In my opinion, I think Gen Zs are just being who they are—a generation of young, inexperienced, somewhat naïve individuals who are doing exactly what we boomers did at the same age.

Remember our days of “Never trust anyone over 30”? It embarrasses me now when I think about how self-righteous and confident in my ill-informed opinions I was when I was in my twenties. Our lack of real-life experience resulted in some bad decisions and what I now realize were horrifying opinions I had back then. Having just burst out of our teens and entering the working world, we were full of confidence in our young, independent adult status. That’s why the military loves to recruit young people; they think they’re invincible.

We’ve all encountered university students who presume they alone have a definitive grasp on global, business and domestic affairs. They’re now educated, full of book-learnin’ and ready to solve the world’s problems, climb the corporate ladder as quickly as possible and correct the mistakes of earlier generations. Thank goodness for that! Otherwise, we’d never have any fresh ideas or insights. And we old boomers are tired of it all. We’ve paid our dues. We’re happy to hand over the reins and watch others make their own mistakes in an effort to get it right.

Can baby boomers honestly claim they left this old world in a better state than when we entered it? On the one hand, we have all kinds of new tech gadgets that collectively simplify and complicate our lives. Our marches and protests back in the 60s and 70s did make a difference in civil rights, women’s rights, the Vietnam War, abortion and various other social issues, but we didn’t finish the job. Living life simply got in the way. And now those fragile gains are being compromised, particularly for our sisters in the United States.

When we got married, had children, built careers, and acquired mortgages, we shelved our idealistic plans for world peace and a safer, cleaner planet. We were too busy worrying about careers, car payments and saving for our Gen X, Y and Z children and grandchildren to go to college and university. We got sidetracked and now things are in a terrible shambles.

The standard of living now is better for us than it was for our parents, The Greatest Generation, but that’s not a world-wide pattern. Without going into all the sad details, we have a lot of ‘splainin’ to do. Crime is down. Cars are safer and we’re better educated but now we have mass shootings, political instability and environmental problems unheard of when boomers were young.

Gen X’ers, Ys’ and Z’s will make a lot of mistakes too. That’s how we learn and improve. Who among us hasn’t dusted off the old “back when I was young” song to remind the younger generations how much easier they have it than we did. Our parents did it to us and Gen Z’ers will, in turn, do it to their offspring.

I actually find the OK Boomer lament to be a bit amusing. Inside its message is the subtle suggestion that we screwed up and it’s someone else’s turn to set things right. We once thought we knew everything and now realize wisdom actually does come with age and experience, both of which we now have in abundance. As we aged, so did our intelligence and emotional quotients.

But who’s going to listen? Did we listen to our parents? Few of us did. Each generation has to learn ‘on the job’, and the X, Y and Z’ers will too. In fact, I hope they learn faster than we did as there seems so much more to be done to set this old world straight again. It’s pretty much beyond our control now. To some extent, our votes count, but only when the good candidates win. That doesn’t always happen. So we have to continue involving ourselves in the right causes.

As we grow older each new generation thinks the previous generations are irrelevant. In many ways we are. That becomes painfully evident every time we try to fix our computer problems, reprogram our thermostat, or try to get a new smartphone working (speaking from personal experience). But, making mistakes and being wrong is how we learn and grow. I personally have not been confronted with OK, Boomer yet but I’m sure it’s being silently articulated every time I regale the younger generations with comparisons between their life experiences and how it was for us Boomers all those years ago. 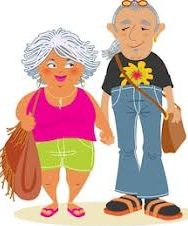 The bottom line is, we may be right but younger generations bring a lot of intelligence, hope and fearlessness to the table and for that, we should be thankful. And, while there are some of us who may consider OK, Boomer to be a slur, or ageist and discriminating, the younger generations must be forgiven. They’ll learn, just like we did, and still are. And that’s OK with me.