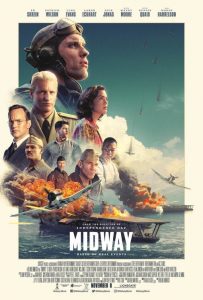 The early snow in Toronto finally let up long enough to let us go catch a matinée of the newly-released movie, Midway. As history buffs, both my honey and I were looking forward to seeing it and its release around Remembrance Day made it particularly relevant. Running slightly more than two hours, we felt we got our money’s worth, despite the usurious prices for popcorn and pop. The movie is a recreation of the American defense of Midway Island in the south Pacific against Japanese forces in June 1942. There are many recognizable names from our knowledge of history and previous movies about the events surrounding the war in the Pacific.

The special effects were mind-blowing. They just keep getting better and better. The plot was fairly accurate from a historical standpoint but there were a couple of issues that rubbed me the wrong way. First of all, why do the Americans always have to make their heroes into non-conformist cowboy caricatures? The lead role of Dick Best was played by a gum-chewing British actor Ed Skrein faking a New Jersey accent. I thought he was a bit over the top in trying to recreate a kind of Steve McQueen persona from The Great Escape—who in fact was a real-life person and, in reality, a Canadian, not American. How would it hurt the plot if their heroes weren’t always gum-chewing rule breakers?

Woody Harrelson was excellent as General Chester Nimistz and Dennis Quaid played Admiral Bull Halsey with gravelly-voiced aplomb. I found the writing to be trite and uninspired, full of cliché phrases and boring dialogue. It was OK but could and I think should have been better. Considering what they spent on special effects, perhaps they should have invested in better writers. The plot needed a bit more historical context to flesh out the events of the battles for the benefit of those who are true history buffs and the choppy editing made it a bit hard to follow at times. I did find the movie’s treatment of the Japanese to be fair. There are good guys and bad guys on both sides and as they say, the winner gets to write the history books. Not all Japanese were in favour of going to war with the United States. This movie is definitely worth seeing on the big screen, so forgo your livingroom’s big screen and see it at the theatre. Enjoy yourself and let me know what you think after you’ve seen Midway, the movie.