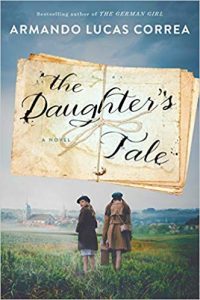 Historical fiction is a genre I particularly love and find hard to resist. Reading as many non-fiction and fiction books as I do, however, about the Second World War can at times become soul-sapping.  I’ve just finished The Daughter’s Tale by Armando Lucas Correa, the story of a young Jewish woman’s last-minute escape from Berlin just before the start of World War II. Amanda Sternberg is left a widow with two young daughters, six-year-old Viera, and four-year-old Lina after the Gestapo takes her husband away in 1939.

In the aftermath of his death, she can no longer ignore the impending threat to their lives by the worsening political situation, so she sends her eldest daughter Viera off on the MS St. Louis to join Amanda’s brother who had escaped to Cuba years earlier. With Lina, she manages to escape to a small village in central France where, before he died, her husband had arranged for her to live with the Catholic wife and daughter of an old friend of his.

Upon arriving at the home of Claire Duval, also a widow, and her daughter Danielle, she is received with kindness but an understandable degree of concern. Although Amanda and Lina could easily pass for Aryan Germans, they are still German and must quickly change and adapt to their new Catholic home. They are forced to adopt a new language and culture in order to conceal their German Jewish background. Improving their French language skills is a priority and in order to blend in as much as possible, they start attending the local Catholic church. Lina is enrolled in the local school.

Despite now living in a remote French village that would appear to have no strategic value to the Nazis, they soon fall under the oppressive rule of the German occupiers and life becomes increasingly difficult. Claire has established a strong friendship with the local priest, Father Marcel, who goes above and beyond his calling to protect his flock. Young Lina becomes fast friends with Claire’s daughter Danielle, even though they are a few years apart in age. Danielle assumes an older sister role and takes Lina under her wing.

As the war progresses and the threats mount, Amanda realizes she must now take more drastic steps to protect her younger daughter. When it appears the Germans are going to lose the war, they take vindictive actions against the remaining French population, imprisoning and even murdering innocent French citizens. Amanda and Lina are taken to a local concentration camp where Amanda takes drastic action to save the life of her daughter.

The story revolves around letters Amanda has written to her older daughter, Viera, who was shipped off to Cuba in 1939. Her few letters were returned undelivered but she keeps writing anyway and saving them when they are returned, hoping to one day reunite with her older daughter. She hopes to reassure Viera that she loved her and that it was because of her love that she was sent off on the MS St. Louis to Cuba. This is the famous ship with 900 passengers, mostly escaping Jewish citizens, that was rejected by Cuba, The United States, and Canada before returning to France. Most of the returning passengers were ultimately sent to their deaths in Nazi concentration camps although some were accepted by Great Britain.

This is a fascinating story along the lines of Sarah’s Key, The Lilac Girls, The Huntress, Madame Fourcade’s Secret War, The Alice Network, The Age of Light, and The Nightingale. As I mentioned above, it can be difficult to read about the tragedy of war. I’d rate The Daughter’s Tale 7 out of 10. It’s a good read for fellow fans of historical fiction.

Disclosure: If you order from these links, you will receive Amazon’s best price and I may receive a teeny, tiny commission. Thank you.