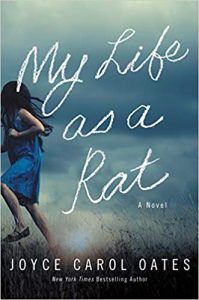 A rat is someone who snitches on another personâ€”someone who breaks a moral code by revealing the transgressions of a friend or family member. InÂ My Life as a Rat, a new novel by Joyce Carol Oates, the snitch is a 12-year-old girl and the price she pays for breaking the code far exceeds what is fair and justified or what she deserved. Violet Kerrigan was born the youngest in an Irish Catholic family of seven children in South Niagara, near Buffalo, N.Y. They’re a working-class family in a working-class town. She loves to eavesdrop on her older teenage brothers and one night she overhears them in a highly agitated state, discussing how they’re going to cover up their murder of a young black boy who attends the same school as Violetâ€”a murder they committed. When the stress of trying to keep her secret becomes too much for Violet to bear, she spills the entire story to the school nurse, who in turn calls in the police.

When the truth is revealed, her brothers are arrested and charged with manslaughter. Instead of her parents protecting and defending Violet’s honesty, they rise to the defense of her guilty brothers. Her family concocts a false defense that maintains the brothers were innocent victims of white hatred by the black community. Violet is disgraced and shunned by her parents and her siblings. For her protection, she is turned over to the care of a childless aunt and uncle who live many miles away where she is expected to reinvent her life while her brothers are serving prison terms.

The tragedy is that Violet loves both her parents and her sisters and cannot understand why they have turned against her. She was a favoured daughter, an excellent student, and a good Catholic.Â  How could this have happened? As the years go by, she enters and finishes high school, enters college and is allowed no contact with her family. She continues her education by taking part-time college courses while working and living an anonymous life. Violet now goes by the last name of her aunt and uncle to put some distance between herself and all the negative publicity arising from the heinous crimes committed earlier by her brothers.

As Violet enters adulthood, she continues to mourn the loss of her beloved family and can’t understand why she has been ostracized. By her mid-twenties, she decides to make personal contact with her next-oldest sister, Katie, to attempt a reconciliation. One of her brothers has been released from prison and she’s hoping that he can forgive her and put the past behind them. This family drama is an insight into 1970s race relations in the United States as far north as the U.S./Canada border. It’s not an uplifting story but it does shed light on the power struggles in traditional families, the difficulties arising from alcoholism in the family, economic and social struggles as well as the resiliency of a single young woman under difficult circumstances.

I found the book hard to put down even though it was about a tragic subject. I was never entirely clear why Violet’s mother chose to defend her rogue sons instead of her daughter Violet. Perhaps it was parental blindness by the father who refused to believe in his sons’ guilt and in their home at that time, patriarchy ruled. If you figure it out, let me know. We all know Joyce Carol Oates is a marvelous writer and My Life As A Rat bears this out.Â I’d rate it 7 out of 10.

To orderÂ MY LIFE AS A RAT by Joyce Carol Oates from Amazon, click here.

Disclosure: If you order from this link, I may receive a teeny, tiny commission Thank you.