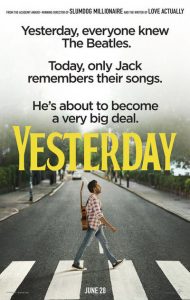 The Beatles or The Stones? In answer to the Proustian question, I’d have to say I’m definitely more of a Beatles fan. I love some of the early Stones’ music likeÂ Time is on My Side, andÂ Satisfaction never fails to rev me up, but overall my loyalty inclines more toward The Beatles. The sensitivity and poetry of She’s Leaving Home, Eleanor RigbyÂ  and their many other songs can’t be denied. That’s why I was so anxious to see the movie Yesterday,Â which I finally managed to catch todayâ€”which as I’m now posting it a day later is actually, yesterday. It promised to be a major vehicle for their music and what boomer wouldn’t enjoy getting a little high from that. It’s a surreal story-line but well played by Himesh Patel (from BBC’s Eastenders) and Lily James (who played Lady Rose in Downton Abby) as lead characters Jack Malik and his childhood friend and supporter, Ellie.

Jack is a wanna-be part-time rock musician who works at a big box store by day and plays his music at pathetic evening and weekend gigs (shades of Saturday Night Fever’s plot?). Just as he’s ready to give up on his music career, a solar flare knocks out the entire world’s electricity for twelve seconds. When the power is restored, major contemporary cultural icons have simply disappeared from history, and everyone’s memoryâ€”except for Jack. All of a sudden, no one has heard of The Beatles, Coca-Cola, cigarettes or even Harry Potter.

Jack capitalizes on this gap in history by regurgitating all the Beatles’ music and claiming it as his own. He’s met with skepticism in the beginning but no one can argue the merits of the music and he soon becomes famous for his seemingly amazing song-writing skills. He’s picked up by a high-rolling Los Angeles agent, repackaged and remarketed but ends up unhappy despite the money and fame. There’s an underlying thwarted love story between Jack and Ellie because Hollywood always have to have a love story. Ed Sheeran played himself in the movie and his performance was most commendable. He was one of the better parts.

I think the most remarkable part of going to see this movie for me was the fact I attended my first “Stars and Strollers” movie matinÃ©e. Until today, I didn’t even know there was such a thing. The 1:00 p.m. showing was specially created to accommodate young mothers and nannies with babies. Baaaad idea for an old boomer like me to attend and think everything would be fine. The house lights remain on low during the movie and the sound is reduced somewhat to accommodate what everyone hopes will be sleeping babies. I was warned by the ticket attendant about the possible inconveniences and he informed me that if I found the experience uncomfortable, I could get a refund.

The lower volume didn’t seem to be an issue as I simply turned up the volume on my hearing aids which in retrospect turned out to be another bad idea. The young mothers were all lined up with babies in their strollers in the front row and to my shock and surprise, there was even a fully-equipped change table set up front and centre in the theatre. As soon as the movie started, three babies took turns, tag-teaming the wailing, fussing and screaming. None of the mothers made a move to depart the theatre to spare us old boomer Beatle fans from the noise. They simply walked back and forth between the seats, sitting on the floor and otherwise, doing their mothering thing throughout the movie. Two of them even made use of the change table. How they were able to even get the gist of what the movie was about is beyond me because I heard less than half the dialogue and I wasn’t even attending to a screaming baby.

Now, it’s highly possible the “Stars and Strollers” experience coloured my impression of the movie but I really don’t think so. Don’t get me wrong; I love babies and can’t resist approaching a young mother pushing a stroller in the mall to admire her little one. Himesh Patel was excellent as Jack Malik and his singing was every bit as good as Paul McCartney, perhaps even better. Lily James was perfect, despite her annoying little lisp. But, overall, I found the movie trite and disappointing. The popcorn was good though and I always enjoy my pail full of Diet Coke. The guy in front of me texted throughout the entire movie so I guess he didn’t find the experience all that engaging either. I’d suggest you wait for Yesterday to come to television or get it free through your streaming service. But, I remain a firm Beatles fan which leaves me conflicted about the movie. The music was great, but as romcoms go, it was only OK. I wanted to like it but I didn’t. If you’ve seen it, what did you think? Am I being unfair?

P.S. And I didn’t ask for a refund. I was forewarned and I accept full blame for the outcome.

I loved this summer movie. Have seen it two times and can hardly wait ’till it comes our on DVD ( we can still get them at our convenience store).

Looks like I definitely have to give it a second chance. Thanks, Carol.

Thanks for the warning… I shanâ€™t bother, Beatles fan that I am.

My take is not the definitive word. I think the theatre experience affected my judgment – perhaps you should go see it and judge for yourself. The music was amazing.

I have seen the movie twice and loved it both times. I left the theatre feeling good and the theatre sound system brings out the full flavour of the music. I have experienced the Stars & Strollers movies and suggest regular movie goers pick another time to see a movie. The dialogue in the movie needs your full attention and if your environment is causing distractions you probably didn’t get the full appreciation the movie deserves…..or maybe it just wasn’t you kind of movie.

You’re right. I’ll give another go. Thanks, Gail.