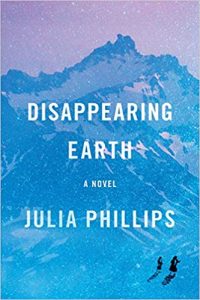 Certain books appeal to me for their ability to transport me to another place, another culture or another time that I would never otherwise have the opportunity to experience. That’s what appealed to me about Disappearing Earth, a novel by Julia Phillips. It’s set in Kamchatka, a remote peninsula extending south from the eastern coast of Siberia in Russia. It’s a contemporary story about the abduction of two young sisters, 8-year-old Sophia and 12-year-old Alyona on a warm August day. This crime is the unifying thread that ties a wide variety of characters together as communities and individuals attempt to solve the mystery of their disappearance.

The police provide more thorough searches and investigations into the missing ‘white’ Russian girls while a young indigenous girl who has been missing for four years receives none of the same attention and consideration. Sound familiar? Are the abductions related? Are the girls alive or dead? What happened to each of them? We’re confronted with the anguish of the mothers of these girls and see how important their participation in the investigation affects the outcomes.

The plot unfolds like a series of short stories. Each chapter is a snapshot of a group of characters whose relevance and interrelationships don’t become evident until the end of the story. I found this approach to story-telling to be a bit confusing and with more than forty characters to keep track of, it was a bit overwhelming at times. Despite this, I loved the story and kept ploughing through.

What particularly fascinated me about this book was the glimpse into the lives of a mixture of ‘white’ Russians and people indigenous to the area. It’s a cultural crossover shared by Canadians with our own indigenous people and there are many parallels to be drawn. There’s a certain amount of racism by the Russians toward the original people and the author is careful to treat both sides with respect. We’re introduced to interesting insights into the traditional lives of indigenous people in the remote northeast of the Asian continent. In the context of modern life this includes cell phones, traffic circles, social problems and local customs.

Disappearing Earth was recommended for summer reading in the July issue of Oprah magazine. I’m often reluctant to read her recommendations as they tend to be dark and depressing. This book, however, was gripping and even a bit educational. It can be hard work at times wading through the parallel lives of all the characters but it’s worth it in the end. You’ll learn a lot about contemporary Russia with its lingering communist influence, through the daily lives of the characters. I found it hard to put the book down and for this reason, I think Disappearing Earth rates 7 out of 10.

If you order from any of these links, you will receive Amazon’s best price and I may receive a teeny, tiny commission. Thank you.