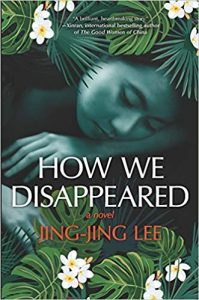 Every so often we read a book that gives us a renewed appreciation for when and where we were born. That’s what struck me the most after reading How We Disappeared, a novel by Jing-Jing Lee. I’ve always felt I won the lottery being born in Canada as a baby boomer after the end of the Second World War. Growing up in a free country that offers so many opportunities and privileges as well as a comfortable standard of living is truly a gift.

The main character of this book, Wang Di was not so lucky. Born to Chinese parents in Singapore, she was only seventeen years old when the Japanese defeated the British and occupied the tiny island. While its citizens were shocked and devastated that the British were unable to protect them, they braced for changes that went far beyond anything they could have anticipated. Not only did the Japanese soldiers conduct regular raids of private homes and businesses to confiscate food and personal belongings, they soon took away their young daughters who were recruited to serve as ‘comfort women’, servicing Japanese soldiers in make-shift brothels.

Wang Di’s story is a composite of thousands of similar stories experienced by women in China, Malaysia and Korea who were subjected to brutal treatment, starvation rations and moral humiliation at the hands of the Japanese for several years. The women’s lives were treated as disposable and if they were no longer able to work due to illness or if they tried to escape, they were simply shot and replaced by someone else.

During her incarceration by the Japanese, Wang Di barely survived. Servicing between 30 and 50 soldiers every day for the duration of her three-year ordeal, she witnessed humanity at its worst, interspersed with tiny, infrequent acts of kindness. She witnessed death, deprivation, and brutality, all the while knowing that she would never be able to return to the normal life she had before she was captured. Knowing her future life would be worthless, she often considered death as a viable option.

Ordinarily, I prefer to read a book with the plot unfolding in chronological order but in this case, the author’s switching back and forth between Wang Di telling her own story in the first person and the voice of 12-year-old Kevin many years later is a welcome relief. As a reader, I needed the emotional break from Wang Di’s heartbreaking story when Kevin’s voice takes over. Kevin is researching his family history more than sixty years later, after listening to his grandmother’s mysterious deathbed confession.

After his grandmother dies, Kevin discovers a series of unposted letters in her personal belongings. Written to an unknown person many decades earlier, they reveal a secret she held but never revealed and Kevin sets about trying to uncover what she had been concealing throughout her lifetime and how her secret related to his family. When Kevin starts putting the pieces of his family history together, all the disparate pieces of the story come together and not quite as I expected. It was easy to make assumptions about how the plot would develop but the author cleverly baits us and then presents something unexpected.

Tragic and heartbreaking as the story is, I could not put it down. We’re given rare insights into the daily lives of the poorer citizens of Singapore during the time of the Japanese occupation. In a colony of blended cultures and nationalities, it’s fascinating to read about how the people lived, worked, what they hoped for and what they believed in. Based on historical truths, the story is shocking and fascinating. Without giving away too much, I will tell you that it has a happy ending which is a welcome relief after reading about such a tragedy. I’d rate Jing-Jing Lee’s How We Disappeared 8.5 out of 10.

If you order from these links, you will receive Amazon’s best price and I may receive a teeny, tiny commission. Thank you.