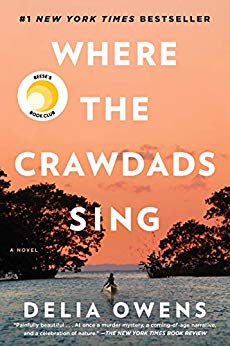 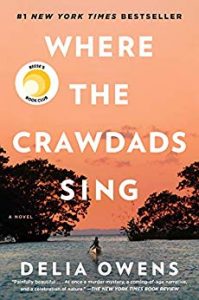 Isn’t it a lovely feeling when you read a book and finish it with a profound sense of satisfaction and enjoyment. That’s how I felt when I closed the cover on Where The Crawdads Sing by Delia Owens. I thought . . . WOW! That was amazing. The New York Times best-seller was on my list but not a priority until my friend Nancy mentioned how much she loved it. Then I moved it to the top of the list. Delia Owens is a nature writer and wildlife scientist with several non-fiction books to her credit. This is her first novel. Owens grew up in Georgia and now lives in rural Idaho close to the natural world she loves.

The story takes place in the marshes of North Carolina’s low country. The main character, Kya is the youngest of a family of five children living in a rural shack with a mentally unstable mother and a drunken, abusive father. One by one her older siblings and eventually her mother leaves until there’s just six-year-old Kya left with her father. They live an isolated life with no electricity, plumbing or even sources of food. Her father’s meagre veteran’s pension usually goes for liquor but some is spared to buy grits. The father disappears for days and weeks at a time, eventually never returning at all and Kya is left to live a feral existence, challenged to provide for herself.

She attends school for only one day at the age of seven after being forced into town by the truant officer. But she’s so humiliated by other children for her lack of knowledge and dirty appearance she never returns. Known locally as The Marsh Girl, Kya ekes out an existence by selling mussels she digs on the beach and using the money to buy grits, matches and other basics. Eventually, she strikes up a friendship with a local boy, Tate who had once been a friend of her brother Jodie. Tate shares her fascination with marsh wildlife, biology and nature. When he learns she cannot read or write, he undertakes teaching her, giving her school text books to read and study. Over the years, her knowledge grows to the point she becomes an expert on marsh life but remains isolated in her tiny shack.

Naturally, she falls in love with Tate but he disappoints her by leaving her like everyone else in her life, when he goes to university in Chapel Hill. Kya strikes up a relationship with Chase, the town football star and all-round rogue. Then, Chase is found dead at the foot of an abandoned watch tower in the woods. Was it murder or an accident. Evidence points to Kya but was she really responsible?

The story is full of flaws but it is only a story so I just let myself go with it. It’s hard to imagine a young girl surviving alone in the woods who grows up to be a beauty and writes best-selling nature books with no formal education. How could each family member leave without taking a helpless six-year-old with them? There are plenty of bones to pick with plot issues. But it is a good story. I’m not a fan of courtroom dramas but in a murder mystery it’s impossible to avoid. The trial is obviously integrel to the plot with a white knight lawyer appearing out of nowhere. Just let the inconsistencies go. The ending is wonderful and while the story is implausible, I’d give the book 8 out of 10. Loved it.

To orderÂ Where The Crawdads Sing by Delia Owens from Amazon, click here.(Disclosure: If you order through this link you will get their best price and I may receive a teeny tiny commission from Amazon.)

Your book reviews are consistently excellent, Lynda. I’m almost always lured to my library.
You’ve done it again. Thank you.

Thanks J. Like to keep you fit hiking to the library.

Nice blog Linda, it sounds like you enjoyed it as much as I did. I’ll share my thoughts on the shared suggestions. Cheers, Nan

Thanks for spurring me on.