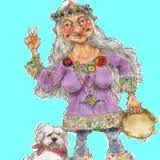 Math has never been my strong suit. I’m a consistent 20% tipper in restaurants because it’s easier to calculate 20% than 15% in my head (and because I was a waitress a long time ago, so I appreciate the value of tips to servers). But, as baby boomers age, we realize that it’s easier to get through life with two people than it is with one. I was single for ten years before I married for the first time and spent seventeen years between husband number one and number two, so I’ve had a total of twenty-seven years of experience being single and on my own. And I’ve come to the conclusion that as we round out our third quarter, as The Beatles so eloquently put it, “we get by with a little help from our friends”. And that includes husbands, partners, neighbours, family members and even pets. They all help us get through the day. They filled the void during all those times I was on my own and continue to do so. The much maligned phrase uttered by Tom Cruise in Jerry McGuire, “You complete me,” is suddenly not so corny.

I’ve written before (click here to read I’m not OK. Are you OK?) about the downside of certain aspects of aging. Being forgetful or absent-minded is naturalâ€”rather like defragging our hard-drive. Our brain has to dump old data to make room for new input. Regrettable but understandable. But my honey and I have recently experienced too many memory faults and error messages to write them off as simple updating of our ROM. Just last night we were sitting at dinner and couldn’t figure out what year we moved into our house. Was it two years ago or three? The mental exertion soon proved to onerous so we moved on to dessert.

One day when I was checking out of a big box store I got caught with 12 items in my cart and only 11 items on my bill. I’d picked up two bags of pecans and accidentally only rang up one. I naively thought I was intelligent enough to handle the self checkout but obviously I over-estimated my abilities. To make it worse, just as I was standing there sorting out the issue with the checker at the door, while the lineup of impatient shoppers grew even longer behind me, I hear “Hi Lynda”. My friend Jeannette happened to be passing by just in time to witness my embarrassing shakedown by store security. Two lessons emerged from this experience:

Last week I mentioned to my husband that the windshield washer tank in my car was empty. When I kept pushing the lever, nothing happened. He was inappropriately smug and a tad too condescending when he informed me later that I’d been pushing the wrong lever.

And the list goes on. I gathered some girlfriends recently to watch a Christmas movie and swill wine but my television froze. Nothing worked. A couple of days later when the cable guy came out, it was a loose connection on the back of the receiverâ€”which I had already checked, several times. He was very understanding, under the circumstances (dealing with an old lady).

But the piÃ¨ce de rÃ©sistance came earlier this week when my laptop computer died. It’s only 18 months old and when I bought it I also purchased every warranty and service package available to humankind for just such occasions. I checked the power outlet to make sure it was working, even moving it to an outlet in the kitchen to double-check. I changed the battery in the mouse and double-checked that the mouse was ‘On’. I couldn’t even reboot, which usually solves most problems, because it wouldn’t turn on or off. I pushed the laptop’s On/Off button multiple times with varying degrees of pressure and lengths of time in futile attempts to achieve ignition. No luck. Like Monty Python’s parrot; it was deadâ€”not resting, not asleepâ€”definitely dead! 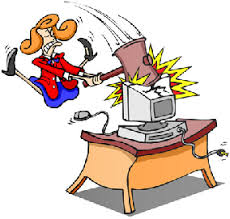 So, I called Microsoft and the nice man informed me I might have a faulty display driver and suggested I take it to the Microsoft store where they would address my problems and perhaps replace my laptop. I was thankful for my brilliant foresight in purchasing those expensive warranty and service contracts. The next morning I made a 45-minute drive to the store. When I explained my situation to the little boy working there, he laid a nice protective pad on the counter, placed my dead parrot on the pad . . . and . . . TURNED IT ON. It worked!!! Heaven only knows why I couldn’t do the same thing pushing that little button; maybe my laptop just wanted to go for a nice long car ride and be fingered by someone with a gentler touch. Even my technically challenged husband now takes great delight in offering to turn my computer on.

As I said earlier, I’m not a math whiz; in fact I’m a complete ditz but when it comes to numbers. Fortunately my husband is amazing so he helps me. But he’s not good with the English language, written or spoken so I’m always available to bail him out with spelling and pronunciation issues. It’s the perfect yin and yang. We support each other’s shortcomings. Watching my parents as they grew older, I began to appreciate the value in having someone alongside to help shoulder the load. Now we’re in the same boat. What one can’t do, the other usually can. We muddle through. My friend Terry showed me how to use the timer on my oven; Gail’s our social convener; her husband Mike’s our go-to I.T. guy. I’m the source of new Britcoms on television. When we’re feeling discouraged or in need of a little moral support, who do we call? Our friends.

The challenges of aging aren’t what John Lennon and Paul McCartney had in mind when they penned “I’ll get by with a little help from my friends” but even then they understood the depth of meaning in the words to When I’m Sixty-Four. So far, he still needs me, still feeds me (twice a week when it’s his turn to cook), and still sends me Valentines. Mine for ever more. The reciprocal shortcomings of two people added together equals a whole in any equation. That’s not just science; it’s life. Maybe Jerry McGuire wasn’t so stupid after all.

The Beatles
When I get older losing my hair 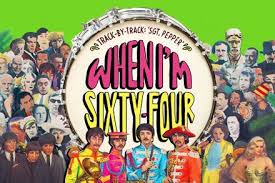 Well said….thank heavens as friends, we are growing old together and can laugh at ourselves.

Ain’t it the truth. Important as we age that we recognize these changes and seek, accept and offer support. We learned early that two heads are better than one, two sets of eyes etc. Great blog Lynda.

I didn’t mean to be anonymous.
jacquie

Yup. Life is a two-person job.
…a great blog, Lynda.

Thanks. As they say, “It takes a village”.