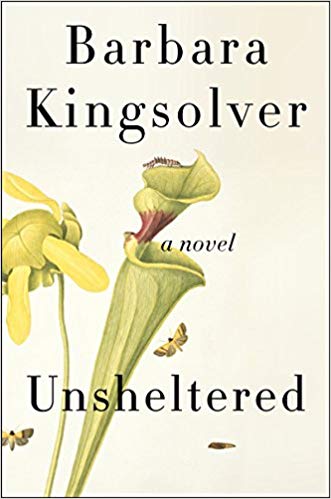 When I read Barbara Kingsolver’s The Poisonwood Bible (which I absolutely loved) several years ago, it was the first time I’d heard of the author and immediately became a fan. Her newest book, Unsheltered is not quite as engrossing but it’s still a wonderful read. It’s the story of life’s plan not working out quite the way the characters hoped it would but coping and adapting along the way. Normal life.

Willa Knox is a middle-aged science writer married to a university professor who never quite makes the tenure track. Willa forgoes her own job security and the family moves multiple times over the course of their marriage chasing her husband’s elusive job security. The price they pay is financial insecurity bordering on destitution and discontented adult children who in no way turn out the way their parents hoped or anticipated. Things reach a critical point when they find themselves in middle age returning to live in her late mother’s dilapidated Victorian home in Vineland, New Jersey, caring for her husband’s elderly, irascible father, Nick, who has multiple chronic illnesses associated with old age and poor lifestyle choices.

Their son Zeke seems to have landed on his feet, but not for long. He lives in Boston and has a baby son with his partner who is a successful lawyer. The Knox’s daughter has been living a hippie lifestyle in Cuba for an extended period of time and is mostly incommunicado. Then, Zeke’s partner commits suicide leaving him unprepared and unwilling to be a father to his infant son. As any mother would, Willa steps in to take care of the baby just as their daughter returns from her mysterious sabbatical in Cuba. The entire extended family ends up living together in a 150-year-old house that is literally falling down around them.

In an attempt to access financial support for repairing the house, Willa befriends a local historian and together they research the home’s history in an effort to justify the historical designation application required to finance major repairs. She learns the original owners one hundred and fifty years earlier were similarly challenged the way Willa and her family are. Personal conflicts, precarious job security, influential neighbours and financial insecurity are just some of their shared dilemmas. The two stories run parallel in alternate chapters.

Reading this book also reminded me of how lucky I am to be Canadian with universal health care. A major source of stress and conflict in this story stems from the lack of available, accessible universal health care in the United States. The difficulties encountered by working Americans in obtaining everyday health care for elderly parents is an ongoing tragedy. Despite the fact the family has a health insurance, their financial problems are exacerbated by the chronic health problems of Willa’s father-in-law, a rabid Republican who is oblivious to the Herculean efforts expended by his daughter-in-law to obtain basic health care for him. It’s not an issue for Canadians and that reality hit home as I read of the family’s struggles.

The house itself is almost a metaphor for life and its struggles. It has a beginning, a middle and an end with many complications in between. We can patch the roof, paint the porch and replace the electricity but ultimately no amount of intervention will forestall the inevitable when the basic structure is crumbling. But the death of a house doesn’t mean the end of life itself. As Mary Treat, a nineteenth century neighbour once pointed out, “Without a roof, you’re open to the sky and all its glory”. Unsheltered is written with sensitivity, intelligence and insight. Kingsolver’s observations through her characters are at times funny and always engaging. I’d rate it 8 out of 10.

To order Unsheltered by Barbara Kingsolver from Amazon click here.

To order The Poisonwood Bible by Barbara Kingsolver from Amazon click here.