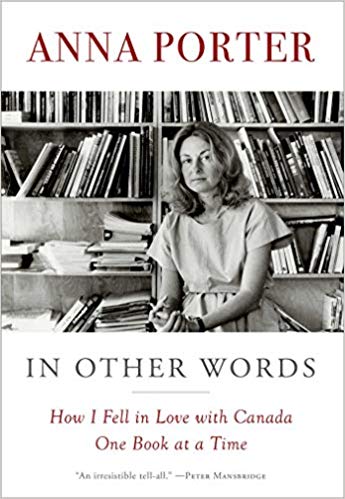 If you’re a lover of Canadian literature, then you’re in for a treat. Anna Porter, author of In Other Words, How I Fell in Love with Canada One Book at a Time, is an author and former publisher extraordinaire with a pedigree spanning decades in the book business. I first became aware of her in the early seventies when she was profiled in Canadian magazines and newspapers as someone to keep an eye on. As a baby boomer and working mother of two young girls Anna Porter moved in the exalted circles of the rich and powerfulâ€”someone we followed in hopes we could learn from her success.

Born in Hungary, Anna Szigethy escaped during the revolution with her mother (separated from her father, a survivor of the Russian gulag) to Austria where they then emigrated to New Zealand as refugees. As soon as she finished university, she left for London, England, mecca for young baby boomer women looking to begin exciting new lives. Her fluency in several languages and appreciation for literature landed her an entry-level job in publishing. When Anna Szigethy arrived in Canada from the U.K. in the late sixties in her mauve mini-dress and white vinyl boots, she’d already chalked up experience working with Collier Macmillan International’s UK office.

When she joined McClelland and Stewart, the company was already experiencing serious financial problems. Working long hours for little pay under irascible patriarch Jack McClelland, she helped grow the company and despite their stable of famous Canadian authors, M&S was constantly on the brink of bankruptcy. When she married high-profile Toronto lawyer Julien Porter, her struggles with balancing a career and young family will ring familiar to any boomer woman trying to do the same thing in the 70s and 80s. There’s no magic solution. It’s hard work, both at home and on the job.

Authors like Margaret Atwood, Peter C. Newman, Margaret Laurence, Farley Mowat, Marian Engel, Conrad Black and Pierre Berton were regulars in the offices of Anna Porter as she juggled not just the publishing of their new books but their fragile egos and creative personalities. The famous names are too numerous to list here. As an early feminist, she challenged the old boys’ network and supported women writers like Doris Anderson, Naomi Wolf and Sylvia Fraser.

In Other Words is a literal “who’s who” of Canadian literature. It’s beautifully and informatively written by a publishing giant who witnessed and was part of an amazing period in publishing. By the time she launched her own business, Key Porter Books, McClelland and Stewart was going down for the third time and is now owned by Random House Canada, a division of German media giant Bertelsmann.

On a personal note, M&S’s financial woes made me feel guilty about not returning half a dozen hardcover books they gave me once on approval. I clearly remember sitting in the grim, dark offices of M&S on Hollinger Road in Scarborough one day in the 1970s when I went there to research a suitable corporate Christmas gift. We ordered several dozen copies of Peter C. Newman’s The Canadian Establishment but I really should have returned the books we didn’t order. I now feel guilty, although I know my keeping those books would not have meant the difference between financial salvation for M&S and their ultimate demise.

I can’t recommend this book enoughâ€”perhaps it’s because I’m a book lover, a feminist and a fan of Canadian literature. Anna Porter’s In Other Words is a must-read. I give it 9.5 out of 10. I absolutely loved every single page.

To order In Other Words by Anna Porter from Amazon, click here.