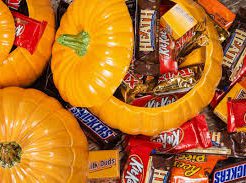 You know what it’s like. Every year we pick up Halloween treats from the grocery store, usually two or three weeks before the big night and for some reason the supply mysteriously evaporates before October 31st even arrives. This strange phenomenon is particularly puzzling when it’s something you like. Boxes of Smarties, tiny Mars Bars and potato chips are highly vulnerable while raisins usually remain safely stacked in the pantry.

We have to be so careful about what we dispense these days. When we were kids, the best treats were the always the home-made onesâ€”sugary maple walnut or chocolate fudge, taffy and peanut butter cookies were freely passed out in little orange and black paper bags with witches on them. Our closest neighbours used to pack “special” bags for us “special” kids who lived next door and they were always the best. Now everything has to be commercially sealed and inspected for tampering before being consumed. It’s amazing we survived.

Every year I’m never sure how many kids we’ll get at our door but I plan and hope for plenty as I love seeing the little ones stuffed into their costumes stretched over winter parkas and toques. We live at the end of a dead-end courtyard and are very tricky to find, despite leaving all the outside lights and illuminated pumpkins on. Last year we had only two visitors; one little boy from two doors down and another little 3 ft. superhero of indeterminate gender. I’d stocked up on chips and chocolate bars, then at the last minute sent my husband out to buy red licoriceâ€”just in case there was an unexpected deluge.

The bottom line, to my everlasting shame is that last year I ate 90 little bags of red licorice during the first few days of November, all by myself. How else was I supposed to get rid of them? Consign them to landfill? Then, at lunch the other day, my friend Deb made an innocent comment which is a brilliant solution to the annual problem of preventing the inevitable evaporation of treats before the big night, and how to dispose of Halloween candy afterward. 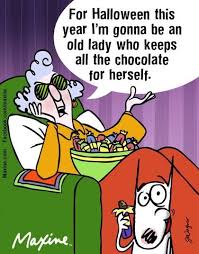 Genius! Why didn’t I think of that? One of the guys I used to work with was mortified every Halloween when he was a little boy because his dentist father handed out toothbrushes to his trick or treating friends, and their house inevitably got egged. That’s one approach.

Or, I could distribute sealed bags of kale chips or packets of hand sanitizers. Even stickers might work but I’m afraid of my home being egged if I gave out something like pencils or pens. I’d be happy with that but kids today are far more affluent, more discriminating and not as happy with any old thing as we boomers were. And furthermore, I’ve already stocked up on Smarties and little chocolate bars. Maybe I could eat the Smarties and chocolate immediately (for the sake of the children, of course ) and replace this year’s handouts of candy with recipe cards. Parents and their little ones could then make their own politically correct, nut-free, non-GMO’d, gluten-free, fair trade chocolate treats. Heaven knows, I’ll never use the recipes. And, hold the eggs!