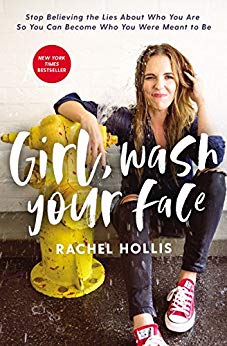 When I saw Rachel Hollis, author of Girl, Wash Your Face interviewed on CTV’s The SocialÂ recently I was impressed by her enthusiasm and energy. But what does a 35-year-old Christian mother of four children with a type A++ personality have in common with me? I wondered the same thing when I started reading her book but soon became so engrossed I couldn’t put it down. I read the entire book in a day. And despite it being less than 300 pages (depending on the font size on your e-reader) I had dozens and dozens of pages bookmarked.

Rachel Hollis grew up in an all-white middle-class small town in California. Her father was a pastor and her life was seemingly typical of 1980s America. Except her father had a hair-trigger temper, her troubled older brother committed suicide at sixteen and she lived in constant fear of disapproval. She focused on doing well in school so she could graduate early and leave her home town. At the age of seventeen (the same age I was when I left home) she moved to Los Angeles where she expected her life to take a positive turn. But our problems have a habit of following us regardless of our geography.

Young women often have a naÃ¯ve life plan for themselvesâ€”love, marriage, babies, living happily ever after. Rachel Hollis was no different. When her plan started to go off the rails, the stress caused physical reactions including Bell’s palsy and vertigo which forced her to reevaluate her entire life. Along the way she made many mistakes and learned valuable lessons which she generously shares with readers.

Each chapter of the book sets out to debunk a common myth that sets women up for disappointment and even failure, starting with the title’s tag line: Stop Believing the Lies About Who You Are So You Can Become Who You were Meant to Be. Hollis begins the first chapter with Lie #1: SOMETHING ELSE WILL MAKE ME HAPPY and each subsequent chapter follows the same theme. She articulates a lie, describes her personal experiences with this misconception and delivers the beef, summing up each chapter with point-form THINGS THAT HELPED ME. . . The book is filled with so many wonderful bon mots:

We’re never too old to learn

One of Hollis’s lessons learned hit me smack in the face the other day at the hairdresser’s. There was a little boy around six or seven years old in the next chair who refused to get his hair cut. Despite the best efforts of his dad and the stylist, the little guy kept whining and wiggling, squirming his way out of the chair. My first reaction was to judge the child as spoiled and the father as indulgent. When baby boomers were children, if we’d have displayed similar behaviour our parent would have simply slammed us into the seat, ordered us to sit still and that would be the end of the discussion. We’d be too terrified to move.

Instead of casting my usual disparaging judgment and shooting the father the evil eye, I considered for a moment that the child might have special needs and challenges. Perhaps he had sensory issues. Maybe the man was a “Big Brother” and the child was from an abusive home and didn’t like being touched. Thanks to Rachel Hollis, I cast the father a sympathetic smile and went back to reading my book. We should never judge the actions of others without knowing their particular back story.

I not only enjoyed this book, I devoured it which proves this old boomer still has room to grow and learn. Rachel Hollis is so inspiring and a perfect illustration of what we can learn from someone we perceive as having nothing in common with us. She admits to being an impatient mother who sometimes yells at her children. She has bad habits like the rest of us (i.e. Diet Coke) and describes how she works on fixing her shortcomings. Her writing, like her personality, is fast, full of relatable personal experiences and surprisingly mature for someone only 35 years old. I can only imagine what lies ahead for this young woman. I’d rate Girl, Wash Your Face 9 out of 10.

Click here to order Girl, Wash Your Face by Rachel Hollis from Amazon.

I Marie-Kondo’d my bra drawer and feel so uplifted

[…] Rachel Hollis, author ofÂ Girl, Wash Your Face was right:Â Bras are the devil’s work. Over my lifetime, I’ve probably invested the equivalent cost of a luxury German imported car in a futile search for a comfortable bra. I’m convinced they don’t exist. Yesterday as I was getting dressed to go out, I tried on no less than three before I found one comfortable enough to wear to the mall. And when I got there I bee-lined it for the Jockey For Her section in the lingerie department in search of something wearable. I opted for one of those sports-like all-over… Read more »

I have made a note of this book and it sounds like a must read for me. I think since I have retired I have become too judgemental of others. I find myself pausing sometimes when I am having an inner “passing judgement” moment to ask myself “what do you even know about this person”. I used to be a great believer of the phrase “you need to walk a mile in someone’s shoes”. It is time for me to stop and reflect on my inner voice before judging others.

We’re always learning, aren’t we. Thanks for your comments Elizabeth.

It sounds like a book I would like to read and also give as a gift…. Thanks

Wash your face and get your life together | BOOMERBROADcast