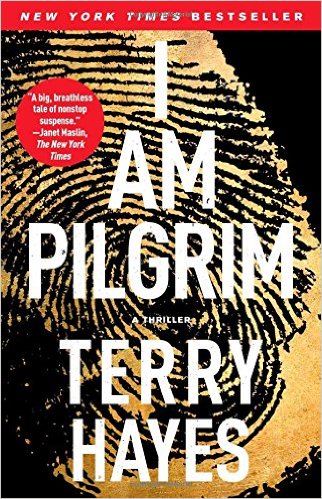 I knew I was going to love I Am Pilgrim by Terry Hayes right from the opening sentence. It was a line from a Beatles’ song, “There are places I’ll remember all my lifeâ€”” The author obviously knows his audience. The story begins with a bizarre murder in a seedy New York Hotel. The crime scene replicates instructions detailed in a book written by a former high-level intelligence agent known under a variety of aliases that mask his real identity as Scott Murdoch a.k.a. The Pilgrim. When Murdoch is brought in to view the product of his “instruction manual” a complicated web of evidence unfolds.

Murdoch is a seasoned veteran of international espionage working at the highest levels of United States security and intelligence. When he’s persuaded to help the investigating New York police officer, the threads of the crime reach to the Middle East and uncover a potential threat to American security even greater than 9/11. As Murdoch peels back the layers of the simple crime in the seedy hotel, he travels to Turkey where it’s hard to tell the good guys from the bad guys. In keeping with his training, everyone he encounters is considered a bad guy.

When a young American billionaire is found dead after accidentally falling from the cliff in front of his luxury villa in Turkey, the plot thickens. Soon, the President of the United States (a fictional good guy, not the current one) is involved in the action. A rogue jihadist has created a vaccine-resistant strain of smallpox that he has manufactured and plans to release on the American public through seemingly innocent flu vaccines.

The severity of the threat is such that less than a dozen people are aware of it in order to prevent international panic and catastrophe. The Pilgrim draws on his years of expertise dealing with terrorists and traitors to eliminate the problem. The book was over one thousand pages on my e-reader (624 pages in hard copy) and I couldn’t put it down. It was a page-turner for sure but peppered with bits of humour and more than enough twists to keep me engaged the entire time. Author Terry Hayes is an Australian journalist and his first novel is a New York Times best sellerâ€”a remarkable achievement. I’d rate it 9 out of 10. Have fun.

Click here to order I Am Pilgrim by Terry Hayes from Amazon.

Sounds good. I’ll have to read it.

I just returned it to the library so unless there’s a waiting list, you should be able to get it.