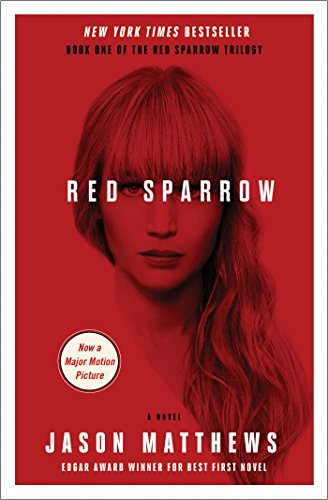 There’s nothing more compelling than a great story about espionage especially when it is written by a real-life former intelligence officer who was part of the C.I.A. for more than thirty years. The movie industry thought so too and produced a movie based on the book “Red Sparrow” by Jason Matthews. Although I have not yet seen it, the movie is rarely as good as the book. Movies can never capture the nuances of the thought processes of the characters or the subtle and delicate intertwining of various plot lines that comprise a book of several hundred pages. Books are infinitely more fascinating even without special effects and big-name movie stars.

When beautiful young Dominika’s ballet career is permanently derailed by a broken foot inflicted by a jealous fellow dancer, her entire life’s plan is erased. At her father’s funeral she is approached by her Uncle Vanya, an unscrupulous General in the SVR (formerly KGB) who makes her an offer she can’t refuse. In return for becoming a special Red Sparrow agent, her mother will be able to stay in her large Moscow government apartment and their lives can proceed as comfortably as before her father’s death. Red Sparrow is the name given to Russian agents, predominantly female but including a few males, who are trained in a so-called ‘whore school’. They are schooled in the finer arts of seduction which produces agents given special assignments requiring them to elicit secrets through old-fashioned pillow talk.

Meanwhile, the security of Nate Nash, a young American agent stationed in Moscow is compromised and he’s forced to relocate to Helsinki. Although he’s a relatively junior agent, he is the primary liaison between the CIA and a highly placed Russian double-agent called MARBLE and the Americans want to maintain his relationship with MARBLE (who is incidentally one of the few sympathetic characters in the novel). The Russians are aware of a deep mole in their network and assign Dominika, code-named DIVA to coerce Nate into exposing the Russian traitor. Naturally, a love story develops between the two agents and the plot becomes extremely complicated.

As we work our way through the various plot lines, the reader is educated about the CIA and espionage jargon, dirty tricks and political struggles. We feel like part of the team and I started feeling rather clever when I started to put two and two together, until things didn’t add up to four. I often became impatient with the clumsiness and weakness of Nate and wanted to yell at him to smarten up. But the secondary characters were fascinating and kept me engaged. The story line is current and Vladimir Putin makes periodic fictional appearances.

In real life, the author lived and served as a foreign intelligence agent in countries around the world so he has intimate knowledge of the cities where the action unfolds. He embraces local cultures and includes descriptions of meals enjoyed by the various characters, followed by a recipe at the end of each chapter. This book is part one of a trilogy and I will no doubt be checking out the next two. As I was reading, I was blown away (but not really surprised) by the level of intrigue perpetrated by the CIA and SVR and the overwhelming degree of corruption that exists.

Red Sparrow is a hefty read but well worth it. The author’s technical knowledge is impressive and we’re constantly kept in suspense about where the story will go next. The dialogue is intelligent and at times humorous, and I’m left wondering if there really is such a thing as a Russian “whore school” for secret agents. If I ever meet Jason Matthews I’ll be sure to ask as he’s bound to know for sure. I may even check out the movie starring Jennifer Lawrence, but think I’ll wait ’til it comes on television as it’ll probably be a disappointment after reading the book. I thoroughly enjoyed readingÂ Red Sparrow and give it 8 out of 10.