Britain may have Dame Judi Dench as their national treasure but we have our own Boomer Broad Mary Walsh as our beacon of everything Canadian. Newfoundland-born Walsh is a writer, comedienne and actor whose decades-long career began in a local maritime comedy troupe and grew to become a regular on national television. Walsh has skewered Prime Ministers and business tycoons as activist Marg, Princess Warrior. She made us laugh as one of the Friday Night Girls on CODCO and later as a regular on CBC’s This Hour Has Twenty-Two Minutes. 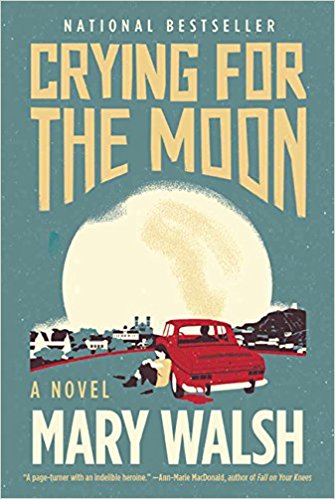 Walsh’s new book Crying For The Moon is a good read. It’s the story of Maureen, a young girl growing up in St. John’s, Newfoundland. She fakes her way on to the school choir to score a trip to Expo ’67 in Montreal. That’s the beginning of the unfolding of a different kind of life for Maureen. With a difficult mother she calls ‘the Sarge’ and a distant father who prefers being out on the boats, Maureen experiences all the confusion and angst of growing into a woman without the support and guidance of secure, loving parents. She seeks love in meaningless sex and suffers the consequences of having her illegitimate baby taken from her.

Maureen functions under dark feelings of inadequacy and a lack of self-respect which inevitably lead her into trouble. Like so many teenage girls struggling under similar circumstances, she puts on a tough, defiant face and tries to make the best of her circumstances. Her risky behaviours lead her into an abusive relationship and ultimately she becomes the prime suspect in a murder.

Throughout the book I could hear Mary Walsh’s voice reading to me with her lyrical Newfoundland accent. She paints a vivid picture of Maureen’s environment and she clearly understands the nuances of being an abused woman. It’s a serious problem and for those who have never suffered at the hands of another person, not always understood. “She thought she deserved it. And then, because she was so beaten down, so crumbled into pieces, so beaten into bits that she didn’t know how to gather up all the crumbs of herself to do anything. Plus, she’d been afraid.”. Maureen’s lack of self-esteem and with no support from her family she’s trapped in an untenable domestic situation. Walsh relates Maureen’s dilemma with sensitivity and understanding as we watch her rationalize the horror and then retreat from her circle of friends.Â  She uses drugs and alcohol to try and cope.

I don’t mean to suggest the book is totally harsh or depressing. Newfoundland humour abounds in the dialogue and in the scenes that play out in the narrative. We’re treated to lovely descriptions of downtown St. John’s in all its colour and idiosyncrasies. Walsh’s depiction of the burden and crush of Catholic dogma enforced on young minds by the teaching nuns is revealing and we sympathize with the feelings of shame and confusion that it generates in Maureen. “She’d stolen so much makeup from Woolworths, she knew that, even if she went to confession, she had no hope of absolution, because the priest would insist that she pay back the store for all the stuff she’d robbed. She would never have that much money, and so she would never get forgiveness.” There are many religious references responsible for Maureen’s feelings of inadequacy and failure.

Eventually Maureen finds a sympathetic friend in a quirky co-worker who helps bring sense to her misguided life. I wasn’t thrilled with the ending but I enjoyed the journey. The story is a snapshot of the life of a misguided young woman trying to make her way in life. It’s packaged in an easy-to-read murder mystery. I’ve always been a huge fan of Mary Walsh so whatever she turns her hand to, I’m there. We have to support other women and Canadian writersâ€”like me, sort of, eh? I give it 7 out of 10.

Canadian writers, like you, sort of, eh? definitely need and deserve support!

You’re a sweetheart! Always appreciate your support. Thanks.

Lynda-Very nice essay on a great entertainer.
You certainly learned how to write book report and prÃ©cis somewhere that we both know about!
Cheers ðŸ¥‚

Thanks! Hope it makes up for being such a poor science student.