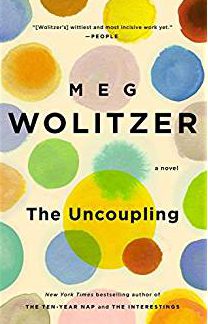 When I saw that I was number four on the waiting list at the library for Meg Wolitzer’s current best seller The Female Persuasion I decided to try another of her books while I waited for Persuasion to become available.Â The Uncoupling was written in 2011 and it turned out to be an interesting choice. I had no idea what to expect but it’s sort of a fantasy that wouldn’t normally have been my kind of book, however it turned out to be a really fun read. The plot follows the inhabitants of Stellar Plains, New Jersey as they fall under a spell that is reminiscent of a Greek play being performed by students at the local high school. If someone you know is a teacher, they’ll really enjoy this book.

We are first introduced to Robby and Dory Lang who along with their teenage daughter Willa form a perfect Stepford family. Robby and Dory teach English at Eleanor Roosevelt High School and Wolitzer’s descriptions of the students, teachers and the assorted members of the community is razor sharp. The Spanish teacher is called SeÃ±or Mandelbaum; Leanne Bannerjee, the school psychologist is having an affair with Principal McCleary; two of the students wear tee shirts that read SLUT I and SLUT II. 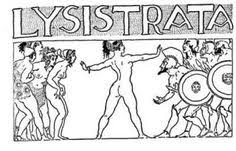 When a new drama teacher, Fran Heller arrives on the scene, the established social order is thrown off balance. As expected of a drama teacher, Heller is unconventional and paints her house in southwestern Arizona colours that are completely incongruent with the northeastern community. Her husband lives far away in Chicago and her precocious son Eli becomes a classmate and BFWB of Willa Lang. The play Fran Heller finally selects for her students to perform in their annual February event is a Greek comedy,Â Lysistrata, the Aristophanes comedy first performed in 411 B.C. Fed up with their testosterone-loaded men spending all their time killing and fighting in the Peloponnesian War for the past twenty years, the women in the play stage a sex strike to deprive their men of what they want the most in lifeâ€”SEXâ€”until they stop warring.

Coincidentally, a cold wind blows through various homes in Stellar Plains around the same time and deprives all the local females of their sex drive. They turn away from husbands and lovers creating an atmosphere of confusion, anger and resentment. As you can imagine, this action has grave repercussions. The drama culminates in a keystone cops kind of conclusion during the students’ grand performance of Lysistrata that made me think of a toned-down version of Jack Nicholson’s comeuppance in Witches of Eastwick. Except, there’s a solid moral to this story. Really fun read and I plan to check out more books by Meg Wolitzer.

Thought for the day:

What if American women staged a similar strike until the men got rid of their guns. Imagine . . .