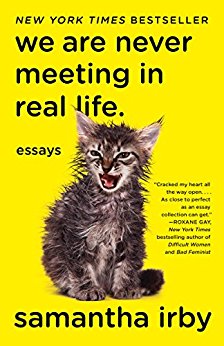 I’ve just finished reading a New York Times best-selling book by an incredible woman who’s hysterically funny, articulate and smart. That being said, however, I’ve been debating whether or not to publish a review of her book because so many of my Boomerbroadcast readers might be offended by its content. So, I’ve decided to err on the side of openness and share my impression of “We are never meeting in real life” which I think is an amazing book by Samantha Irby. It’s a memoir-style series of essays describing her life, the story of a Phoenix rising.

Samantha Irby is a thirty-seven-year-old married, black, lesbian blogger and author whose life is fascinating to this married, white, hetero blogger. As followers of my blog know, I’m always attracted to stories by and about people, particularly women who have been able to rise above a difficult, challenging childhood and make a success of their lives. And I measure success in terms of happiness, not money.

After dropping out of college Irby worked for fourteen years in a veterinarian’s office, hence the picture of the mangy looking kitten on the book cover. It represents the tiny abandoned kitten someone brought into the clinic that Irby ultimately adopted. It was so young its eyes had not opened; it was flea and tick infested, had numerous eye, ear and other infections and generally was not expected to live. But she did and was named Helen Keller because of her initial inability to see. Helen was not a loveable kitten but was obviously loved despite her behaviour. Irby anthromorphosizes the cat and describes their partnership as being like bad roommates. When the pizza guy comes, Helen is “waiting by the door with her suitcase packed, hoping the pizza guy will take her home with him.”.

Samantha Irby grew up poor in Chicago. Her mother had multiple sclerosis, was confined first to a wheelchair and ultimately a nursing home. Her father was an abusive, frequently absent alcoholic. Irby developed all the characteristics of a bright young misfit struggling to survive under difficult circumstances. This book is written in the language of an angry, disadvantaged young black woman who is sexually ambiguous and definitely adventurous. Her writing is heavy on the cultural idiom of her community and she is open and graphic about her sex life. Four-letter words abound so if you are easily offended, then this is not the book for you.

The author is candid about her struggles with weight and health issues, including depression. “When I was growing up, no one in my house was talking about depression. That’s something that happened to white people on television, not a thing that could take down a Strong Black Woman.” She also suffers from arthritis and Crohn’s Disease. Like me, Irby loves going to the movies, “and when I do I like, like, like to have popcorn. And a fountain Coke, because I live for the burning snap of a freshly carbonated beverage.” I hear ‘ya sista’. She prefers exercise classes with seniors or pregnant women where she feels “comfortable around some pancake arms and spider veins and National Geographic titties, for real.”

Reading her book was a peek inside the life of someone I might not otherwise encounter, hence her title “we are never meeting in real life”. That presumed anonymity is perhaps what gives her the courage to write as openly as she does. She shares her financial challenges resulting from having no money and no parental guidance in how to handle whatever money they had. She carried these patterns into adulthood. “A lot of us are living like this, right. Taking cabs and ordering takeout Thai on pay-day, then walking the three blocks to work from the train with a bologna sandwich in our bags a week or so later?”

I absolutely loved this book and came away better informed, happier and more accepting of life’s shortcomings than before I started. Her writing reminded me of Lindy West or Amy Schumer. If you choose to read this book, please be warned that it is not for the faint of heart. Irby’s opinions are raunchy; the language is X-rated but her story is touching, hilarious and unforgettable.