Every boomer gal worth her salt in the sixties read the best-seller Sex and The Single Girl by Helen Gurley Brown. Our lives were modeled around the latest COSMO decrees as our entire generation was creating a new world order. We also read Coffee, Tea or Me? about two high-flying stewardesses (as they were called in ancient times) living the swinging single life. There was even a movie and television series made of the book. We aspired to live exciting lives as modern gals enjoying beginning careers and the freedom of the sexual revolutionâ€”just like Helen Gurley Brown, Trudy Baker and Rachel Jones. Reading about Trudy and Rachel’s escapades as they flew the friendly skies in search of adventure was enough to make this boomer high-tail it to an Air Canada recruiting (cattle) call in their old Toronto head office on Bloor Street in 1971. Although I was turned down, a friend of mine was deemed to have the requisite ‘sex appeal’ and was hired. Fortunately, my life eventually turned out OK despite the rejection by Air Canada.

Last week, to my everlasting horror, I learned that Trudy and Rachel were totally fictional characters created by ghost writer Donald Bain. I thought the originalÂ Coffee, Tea or MeÂ book was non-fiction. It was Bain’s obituary in the newspaper that alerted me to the fact my role models were neither real nor particularly authorly. Bain, who was an airline publicist and pilot himself, based the book on stories from conversations with a couple of Eastern Airline flight attendants, but they were inspiration only. Donald Bain, who was eighty-two years old when he passed away also authored all forty-six of the Murder She Wrote mystery novels, which were turned into the popular television series starring Jessica Fletcher, his alter-ego played by Angela Lansbury. He’s what is known in the biz as a ghost writer. We all know they exist and routinely pen autobiographies for semi-literate celebs and famous people who lack the wherewithal to compose their own story. Mr. Bain was so prolific writing for others, that it was fifty years before he finally had a book published under his own name. At least HGB wrote her own material so I’m somewhat mollified. 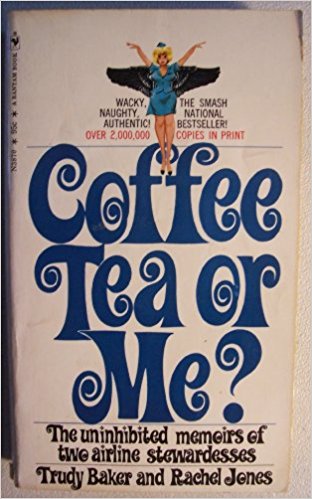 Imagine my shock when a major totem of my swinging sixties days suddenly came crashing down. The problem this bit of information has created is profound. It has undermined my entire belief system. For fifty years I actually thought Trudy Baker and Rachel Jones were real people, role models I could aspire to. I’m now considering the possibility that there might be further deception in what I read on a daily basis. What if those long-ago stunning magazine shots of Jean Shrimpton and Twiggy had been air-brushed and they really weren’t that drop-dead gorgeous? Was I bowing down to false idols? Perhaps Resdan really didn’t cure dandruff and Bonne Belle’s 1006 Lotion wasn’t the solution to my acne problems? Here are some other sixties’ assumptions that have been called into question as a result of that bit of revealing news about Coffee, Tea or Me:

The end of innocence

The possibilities and implications of those decisions based on standard assumptions in the sixties have influenced my entire life. Where would I be today if Air Canada had deemed me sexy enough to hire? Are my wrinkles now the result of applying tank trucks full of harsh astringent to my face to combat acne fifty years ago? Boomer gals were raised to do as we were told, not question authority and to be patient; the rewards will come to those who are deserving. We have all since learned those premises are total bull crap. I know for sure that being a good girl who doesn’t rock the boat in business did not serve me well. In retrospect, I wish I’d been a whole lot more assertive in insisting on equal pay and recognition for work performed. I did well enough, but I could have done better if I’d cast aside so many of those standards of behaviour baby boomer gals were raised with. Self-promotion, equal rights, speaking up were issues we were just starting to dip our toes into. By the time we realized these traits were assets in business not liabilities, we were often past our career prime and nearing retirement. We got the ball rolling but there’s still a lot of work to do. You’re welcome, Xers, Y’s and millennials who think feminism is passÃ©.

The upshot of this experience is that I’m going to be a lot more discriminating about everything I read and am told from now on. From now on I’m going to be a lot more skeptical about the claims made by the cosmetics companies about the efficacy of their ‘anti-aging’ potions. It’s entirely possible they could be selling me a bill of goods. A shocking prospect to consider. Do you suppose food conglomerates are not being totally honest with us as well? Can I really lose weight and stay regular on fat-free yogurt? We learned too late that chewing Dentyne gum does not replace brushing. The ramifications of questioning all those early assumptions are mind-boggling.

My brain’s straining from the implications of the simple discovery that a book I read in sixties and considered to be non-fiction was in fact a total fabrication. I’ve always put all my faith in media being unbiased, just like in the days of Walter Cronkite. Now I’m forced to consider that my entire value system is flawed and now I’m too old to ‘be anything I want to be’. I should have clued in when Air Canada didn’t think so and chose to reject me. Next thing you know someone will be trying to tell me there’s no Santa Claus. If that proves to be another deception, then that definitely proves there’s no advantage in being a good girl. It’s taken me awhile to catch on but from now on, I’m my own boss living by my own rules. It’s about time.

To order Coffee, Tea or Me from Amazon click here.

To order Sex and the Single Girl from Amazon click here.

Don’t forget to “Like” this. Click the â€œFollowâ€ icon to receive automatic notifications of new BOOMERBROADcast.net postings.