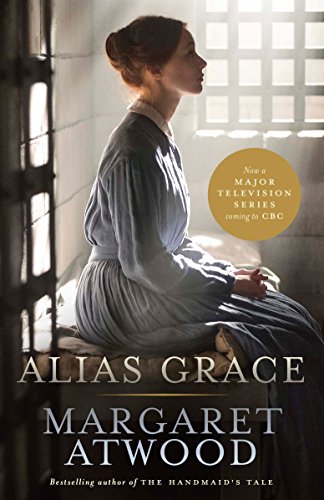 It was a scramble to finish reading the book Alias Grace before the television series aired as I didn’t want to preempt any of the deliciousness of the story line. Written by Margaret Atwood more than twenty years ago, it took me a long time to get to the book because I’d been put off by her later writing, including The Handmaid’s Tale. I disliked The Handmaid’s Tale as I found it too dystopian and weird when I first read it in 1986. Times have changed; the world is becoming scarier and The Handmaid’s Tale is no longer as remote from reality as it once seemed. I’m loving the television series and can’t wait for the next season.

Alias Grace is historical fiction (my favourite reading genre) based on the true story of Grace Marks, a pretty, young Irish immigrant housemaid in Toronto in the mid-1800’s. Put out to work by her alcoholic, abusive father at a young age, Grace secured employment as domestic help in a well-to-do Toronto household where she made friends with Mary Whitney, another young employee of the household. Life was not easy for domestic servants and they were frequently exploited by their employers. When Mary Whitney dies from a botched abortion, Grace is tainted by virtue of her friendship with Mary and is forced to leave and accept a position further north in rural Richmond Hill working for a bachelor ‘gentleman’ Thomas Kinnear. His relationship with his existing housekeeper, Nancy Montgomery soon becomes evident and presents complications for the entire household. Nancy is mercurial, swinging from overly friendly to mean and jealous.

In July 1843, while Kinnear is away from home, Nancy informs Grace and the handyman James McDermott that their services are no longer required and she intends to dismiss them before Kinnear returns. Then the story gets muddy. Thomas Kinnear and Nancy Montgomery are murdered but no one is sure who did it; James? Grace? Or both? The resulting murder trial is a major scandal in nineteenth century Upper Canada. McDermott is condemned to death by hanging and because of Grace’s vague testimony that was highly manipulated by her pro-bono lawyer and her young age (she was only fifteen), she receives a life sentence in the harsh federal penitentiary in Kingston, Ontario.

During her incarceration, a number of well-meaning citizens and professionals attempt to extract the truth from Grace about the day of the murders but without success. Many people feel she is innocent and lobby for her release. Famous novelist Susanna Moodie even took a stab at getting to the truth (sorry for the bad pun) in her book Life in the Clearing but it was generally acknowledged that Moodie’s tendency to exaggeration and belief in spiritualism heavily coloured her account. After fifteen years of incarceration, Atwood introduces a character called Dr. Simon Jordan who specializes in studying mental health issues (such as they were at that time). He undertakes interviewing Grace over a period of months in an attempt to extract the truth once and for all. Although uneducated, Grace is obviously highly intelligent and articulate which makes it difficult to sort out fact from fiction.

Atwood’s story alternates time frames and narration. We’re often presented with the story in Grace’s own words as well as from the perspective of Dr. Jordan and a third party. I’ve never understood why some writers eschew quotation marks when employing dialogue some of the time but not all of the time. I suppose it’s a technical issue beyond my uneducated grasp but it does make for a bit of confusion at times sorting out conversations. Whoever said Canadian history is boring is just plain wrong. Just as I was wrong in discounting Margaret Atwood’s writing after The Edible Woman published in the mid-sixties and still my favourite Atwood novel. Alias Grace is a wonderful read. You’ll find plenty of touchstones you can relate to and the mystery surrounding the double murder will keep you engrossed in the book beyond the last page into the “Afterword” by Atwood. Millions of book buyers can’t be wrong.