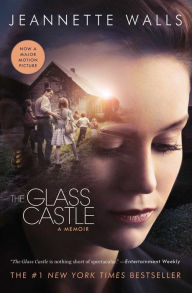 It’s been several years since I read The Glass Castle an autobiography by New York journalist and author Jeannette Walls and it still ranks as one of my favourite books. Walls grew up in a creative but highly dysfunctional family. Her mother was an artist and her father, quite simply, a dreamer who kept promising his family he was going to build a marvelous home for them out of glass and spent an inordinate amount of time working on the plans for his unrealistic scheme. Both parents were intelligent people but totally unequipped and unsuited to raising four children. As a result, Walls and her siblings frequently went hungry, lived an itinerant, unstable existence and were forced to parent themselves. Surprisingly, they all survived and surpassed their parents in making a success of themselves. How that happens and why some people rise above their beginnings while others fail is a subject of endless fascination to me.

Jeannette Walls’s personal story has now been made into a movie of the same title as the book starring Woody Harrelson as her alcoholic father Rex, Naomi Watts as her misguided mother Rosemary and Brie Larson playing the adult Jeannette. The movie is true to the book. Unfortunately two hours is not enough time to cover all the details of her complicated and erratic life but it still does an excellent job. Anyone who has lived with alcoholism in the family will understand the pain and uncertainty that accompanies loving a family member with an addiction. The story also serves as inspiration for those who are trapped in a difficult family dynamic. Jeannette Walls learned that her only escape lay in getting an education and extricating herself from her family. In a pact with her siblings, they agreed to support each other and build a better life for themselves. Which they did. Go see the movie and you’ll understand why I recommend it.

P.S. As if I didn’t get my fill of child neglect for one day, I doubled-down and because there was nothing else on television that night I watched Angela’s Ashes. The true story by Frank McCourt of his neglectful and abysmal childhood growing up in Ireland is eerily similar to that of Jeannette Walls, in a different decade in a different country. No money. Poor parenting. Alcoholic father. Vulnerable siblings. Blessed are the children.

Click here to read my original review of the book The Glass Castle by Jeannette Walls.

You are a glutton for punishment. You should have watched Working Mom’s instead.

I did watch Workin’ Moms too. Angela’s Ashes came on after on another channel and I even stayed up until 11:30. Tonight’s a double-header. Escape to the Chateau which I’ll watch from Halifax at 8:00 and a program on PBS at 9:00 about China’s terracotta warriors. My life’s a thrill a minute! Lynda Davis Follow my blog at: http://www.boomerbroadcast.net Social commentary on life from a Boomer Broad’s perspective e-mail: lyndadavis1@yahoo.ca For further insights into the Boomer perspective on business, fashion, mind and body, order my new book, BOOMERBROADcast. It makes a great hostess, birthday or Christmas gift. Click on this… Read more »

Loved the movie although found it very disturbing especially in a age where we have so may helicopter parents, swinging the pendulum totally in the opposite direction to the life of Jeannette Walls. I grew up with an alcoholic father and remember the shame, fear, resentment, financial burden, disruption, tears and most of all trying to understand the why’s, especially why my mother never left him. I didn’t let it define who I am but instead who I didn’t want to be.

You’re one of the special ones who soared!