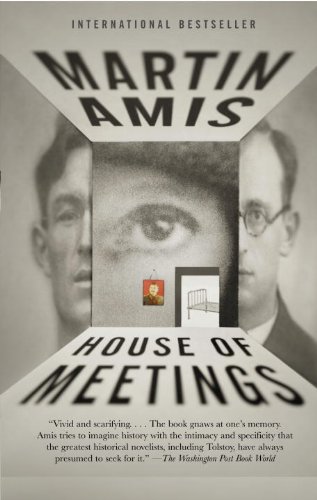 I seem to have a peculiar attraction to novels about Russia. House of Meetings by British author Martin Amis is a fictional story of two brothers sentenced to ten years of hard labour in a Russian gulag during the Stalin years after the Second World War. They are sent to the same camp in northeastern Siberia at the sixty-ninth parallel and subjected to unspeakable horrors which they amazingly survived. I’ve always wanted to read something by British author Martin Amis and the fact I chose this book means I was probably exposed to a somewhat tempered version of his writing. But it was still extremely intense. And, with his extensive vocabulary, I should have had a dictionary beside me as I read.

Narrated by the unnamed older brother who was a handsome, decorated officer in the Russian army that conquered Germany at the end of the war, it is written as a memoir and letter to his American stepdaughter. The narrator attempts to validate his choices and experiences in life, describing them in brutal detail. The seemingly weaker, unattractive younger brother Lev succeeded in marrying the only woman his older brother loved and the effects of the strange love triangle that unfolded spanned several decades. The book’s title House of Meetings refers to a cabin at the labour camp that was used for rare conjugal visits by spouses of the prisoners. Lev’s one meeting with his wife Zoya is a source of fascination for his brother for the rest of his life.

The narrator revisits the gulag when he’s in his eighties to make peace with his memories and his life. Many intellectuals were imprisoned during the Stalin years for no reason other than to meet his insane quotas. Exploring the psychological impact of the experience on poets, doctors, teachers and others is difficult to imagine but Amis digs deep. He researched records, diaries and personal accounts of former prisoners and presents a complex picture of what it took for them to survive. It’s not an easy read but it is fascinating and I think Amis could have written the story as a fictional memoir without the encumbrance of the stepdaughter. I’d give House of Meetings nine out of ten.