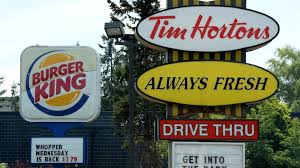 I knew it. I just knew things would go south (literally) when Tim Hortons was taken over by American parent company Restaurant Brands International. RBI also owns Burger King and Popeyeâ€™s Louisiana Kitchen. How can a company with holdings like those possibly understand what Timmie’s means to Canadian culture? When the takeover happened in 2014, I was concerned Timmieâ€™s would lose its Canadian identity and become just another amorphous American fast-food chain. In fact, I blogged about the issue in September 2015. Click here to read Is Timmies still a Canadian cultural icon?

Well, it seems our sugar-coated chickens have come home to roost. Tim Hortonsâ€™ Canadian franchisees plan to launch a $500 million class action suit against the RBI American parent and its senior executives claiming that funds they contribute to marketing and sales have been diverted to other corporate coffers, like administration. Each Tim Hortons franchisee is required to pay 3.5% of their gross sales toward a fund to be used exclusively for marketing, sales and promotion. Basically, RBIâ€™s bean counters and their bosses have been caught with their mitts in the donut jar and are getting their fat fingers slapped. Naturally, Sam Siddiqui, President of the Canadian Division denies the accusation. If they think they’re going to pull the toque over our eyes, they’re skating on thin ice.

As a frequent customer and fan of Timmieâ€™s, I consider myselfÂ  bit of an expert on the issue, having already noticed a change. The very thing I was dreading came to pass. RBI totally disregarded our Canadian-ness. When was the last time you saw commercials on television of snotty nosed hockey-sweatered Canadian kids gathering at Timmieâ€™s for hot chocolate after practice? Where did those heart-warming shots of our camouflage-clad Canadian soldiers lining up at a Tim Hortons outlet in Afghanistan go? Have you seen any commercials in the last couple of years of polite, multi-ethnic Canadians rolling up the rim on a Vancouver street or on Signal Hill in St. John’s? No? Thatâ€™s because the RBI bean counters were covertly diverting franchiseeâ€™s money into American corporate coffers and hoping because of our innate Canadian politeness we wouldn’t make a fuss.

Yep! The lineups at the drive-thru have been getting longer thanks to staff cuts. Theyâ€™re messing with the quality of the products and franchisees are being pressured to cut costs in order to sustain American executives’ bonuses. Well, thatâ€™s just plain un-Canadian and, sorry, weâ€™re having none of it. We can play dirty too. Tim Horton’s franchisees have declared foul and I for one am proud of them. Nobody takes our good nature for granted, hoping we’ll be distracted by Trump’s softwood lumber threats and free trade war. We’re lacing up our skates, putting our best offensive line out on the ice and fighting for our own double double truly Canadian cup. We were hoping it wouldn’t come to this but the RBI Americans have crossed the blue line once too often and we’re calling a penalty. Team Canada is dropping the puck at centre ice and taking our shot. It’s going to be a barn burner.

P.S. July 13, 2017: The Toronto Star ran this article about the issue a couple of days ago: https://www.bloomberg.com/news/articles/2017-07-12/tim-hortons-operators-worry-chain-is-losing-its-canadian-culture 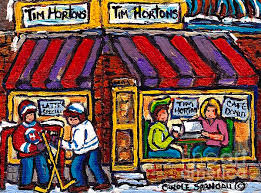 Again, Lynda, clever writing! Plus, I agree with you!