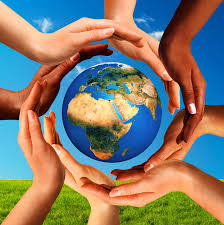 Sometimes, we just need the noise to stop. The Syrian crisis, the threat of nuclear war with North Korea, Putin’s crimes against humanity and the ongoing terrorist threats scare the crap out of me. Then, we have escalating trade wars, racism and climate change denial. Not to mention Trump’s lies and regressive new laws that completely disregard the ordinary person and the future of our planet. When the news starts I get a knot in my stomach so I turn off the television or radio. As I sit looking out my window into the yard watching the trees move gently in the breeze and the new flowers coming to life, listen to the birds, my mind melts into a more peaceful state.

Has the world really become so much more complicated or is my memory failing me?Â  In the swinging sixties while we were wearing mini-skirts, dancing the night away to Creedence Clearwater or worrying about whether “he would call”, there were still serious issues. We had the the horribly escalating Vietnam War, Bay of Pigs, Khrushchev, and of course, Richard Nixon. We were convinced the world was constantly on the brink of nuclear attack. Later on, Bush Jr. baffled us with his stupidity, lied to the world about false threats and sent innocent young members of the military to their unnecessary early deaths.

Since the beginning of time the world has been in state of turmoil and seemingly on the brink of some war or another. Catastrophic economic depressions in the seventies and to a more serious degree in the nineties wiped out financial security for large segments of the population. AIDS, SARS and other chronic diseases were front page news. Every so often I have to take a sabbatical from the news. Electronic media can simply be turned off. Reading print media requires I just skip over the bits I find distressing. Talking about issues with friends sometimes means changing the subject when we get too frustrated and angry about current events. Despite his stratospheric ego, Donald Trump doesn’t know much which is truly frightening. But the world is a complicated place and the further away I get from his noise the less complicated it becomes. That’s one thing I can do to make the world a better place, at least for me.

Made you read it thought didn’t it. Â Lynda Davis Follow my blog at: http://www.boomerbroadcast.net Social commentary on life from a Boomer Broad’s perspective e-mail: lyndadavis1@yahoo.ca For further insights into the Boomer perspective on business, fashion, mind and body, order my new book, BOOMERBROADcast. It makes a great hostess, birthday or Christmas gift. Click on this link: http://www.lulu.comÂ  orÂ http://www.amazon.com

Oh dear! So sorry. Don’t know what the problem is. Try re-subscribing. Thanks. Â Lynda Davis Follow my blog at: http://www.boomerbroadcast.net Social commentary on life from a Boomer Broad’s perspective e-mail: lyndadavis1@yahoo.ca For further insights into the Boomer perspective on business, fashion, mind and body, order my new book, BOOMERBROADcast. It makes a great hostess, birthday or Christmas gift. Click on this link: http://www.lulu.comÂ  orÂ http://www.amazon.com