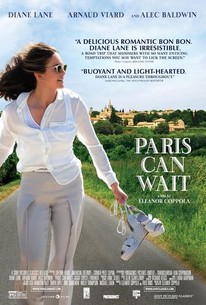 There aren’t a lot of movies out there that appeal to the Boomer set, so when one finally appears, we organize a girls’ outing, line up for our cheap seniors’ tickets, then line up again for our gallon pail of Diet Coke and bucket of chemically questionable popcorn. That’s what happened this week when my gal pals and I settled in to see Paris Can Wait starring Diane Lane and Arnaud Viard with a cameo by Alec Baldwin. The reviews weren’t great but we figured it would be worth the price of admission to see wide shots of French scenery.

Diane Lane plays the neglected wife of a movie producer (Alec Baldwin) who can’t fly to Paris from the French Riviera because of an inner ear ailment. When Jacques, a French associate producer played by Arnaud Viard offers to drive her, since he’s ‘going that way’, she reluctantly agrees. What should be a direct drive becomes several days exploring the historical, esthetic and culinary delights of Provence and the RhÃ´ne Valley under the tutelage of the charming Frenchman. Eventually, they do get to Paris. Sounds like a wonderful trip.

In our opinion, the only people who really enjoyed Paris Can Wait would be those who starred in and were involved in making the movie. They got to spend a few weeks in France during the summer on an expense account while getting paid a nice salary. I don’t always agree with the critics, but this time, they were right.Â  One of my gal pals even fell asleep toward the end. The plot was trite and Harlequin-novel-like. Every cloud has a silver lining though. The Rick Steeves-like descriptions of local tourist attractions and beautiful cinematography were wonderful. That and the popcorn, followed by the four of us going for tea at Timmies after the movie made the afternoon worthwhile. Save your money. Wait for it to come on television and watch it for free. My advice? Pass Paris and proceed directly to Timmies.

Totally agree with your comments……maybe we have gotten wiser in our old age and beyond the point where we enjoy a story about some smooth talking Frenchman trying to steel another man’s wife……feeling neglected as a wife/mother has better and longer lasting solutions than considering an affair with a man who has never committed to a relationship all his life. The best part of the movie was the scenery, food & wine pairing and fashion……and the bonding experience with my BFF;s enjoying the luxury of being able to go to a movie on a weekday. That is why we worked… Read more »

You summed it up perfectly! The whole premise was stupid. Thanks. Â Lynda Davis Follow my blog at: http://www.boomerbroadcast.net Social commentary on life from a Boomer Broad’s perspective e-mail: lyndadavis1@yahoo.ca For further insights into the Boomer perspective on business, fashion, mind and body, order my new book, BOOMERBROADcast. It makes a great hostess, birthday or Christmas gift. Click on this link: http://www.lulu.comÂ  orÂ http://www.amazon.com