Art is subjective and very personal. Sometimes it leaves us cold; other times it touches us deeply. I’m certainly not an expert but over the years I’ve discovered that the work of certain artists draws me in, makes me feel connected and engaged when I view their work. French Impressionist Augusto Renoir and Quebec artist Marc-AurÃ¨le Fortin both have that effect on me. And, so does Nova Scotia primitive folk artist Maud Lewis. Simply looking at one of her paintings of a spring scene with bursting, colourful flowers, blue skies and puffy white clouds, happy cows grazing in bright green fields bisected by a meandering country road fills me with joy. It’s easy to disparage her work as it resembles the happy, brushwork of a young child. That’s the secret of its enchanting beauty.

Like so many artists, Maud Lewis didn’t gain a lot of notoriety and respect until after her death in 1970.Â  Born in 1903 with multiple birth defects Maud faced challenges right from the beginning, leaving school in the fifth grade. Her protective parents died when she was a young woman and her older brother refused to accept responsibility for her care and support. Destitute at the age of thirty-four, Maud responded to an ad in a local store by 44-year-old bachelor Everett Lewis who was looking for a live-in housekeeper. Maud presented herself at the door of his 12 ft. by 12 ft. cabin and never left. And now there’s a movie about their life called Maudie. 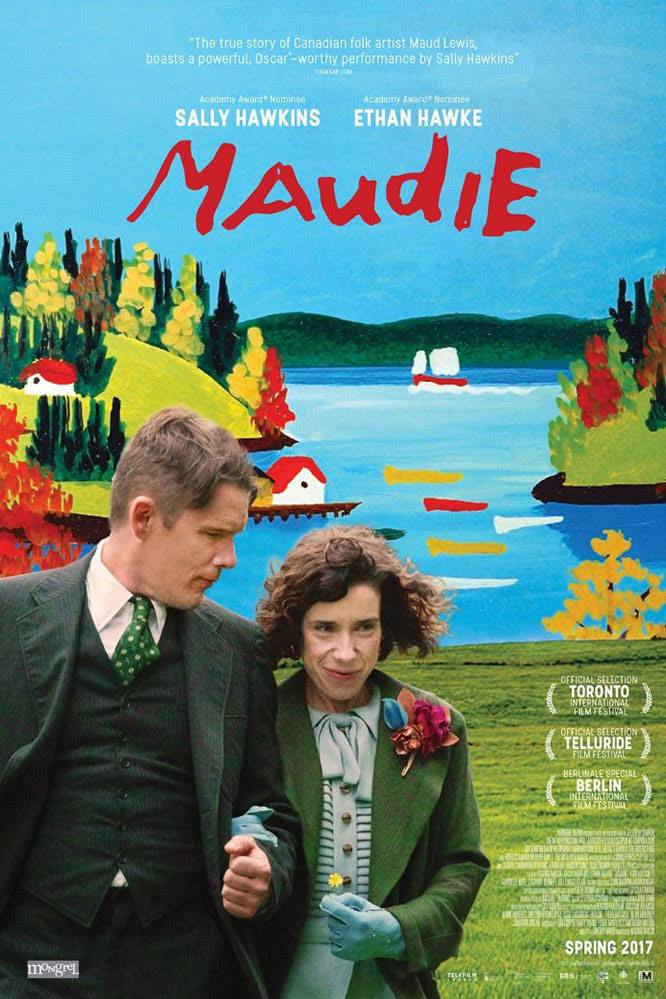 The movie stars Sally Hawkins as Maude and Ethan Hawke as her husband Everett. Before I saw him in the role, I couldn’t imagine handsome Ethan Hawke playing Maud’s contrary, awkward husband, but he was amazing. Sally Hawkins’s portrayal of Maude’s common sense, inner strength and sense of humour was exceptional. Maudie accurately depicts the life of Maud Lewis from early womanhood in Digby, Nova Scotia until her death in 1970. There were credits attributed to several Canadian organizations and it was gratifying to see the woman and her work represented in such a sensitive, respectful movie. There are so few films that the Boomer generation can enjoy (unless you’re into endless sci-fi special effects fantasies) and Maudie nailed it. I loved the movie. The girlfriends who went with me also loved it and if you go see it, I’m sure you will too.

Footnote: A few years ago I visited a Maud Lewis art show of her original work at a small gallery in Yorkville in Toronto. I was totally captivated and would have loved to buy a piece but the most affordable one was $16,000.00. Considering certain pieces now sell for upwards of $100,000+, I should have sold some RRSPs and bought it. Although it might have been a better investment, I probably wouldn’t have been able to part with it. I’ve also visited her tiny cabin which was dismantled and reinstalled in the Art Gallery of Nova Scotia in Halifax. If you’re ever there, don’t miss it.

An absolutely beautiful movie…..it was almost 2 1/2 hours and I hung on every minute of it.

Very special for sure.