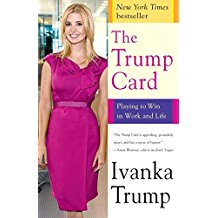 Long before Donald Trump’s name rose from the swamp to become a contender for President of the United States, I was wowed by his daughter, Ivanka. Having watched her on a couple of talk shows and read her early book The Trump Card several years ago, I was impressed with the articulate, beautiful daughter of the real estate mogul. She won me over with comments that were critical of the sense of entitlement that was common among her contemporaries. She denounced the expectation of reward without working for it.

Ivanka Trump is a young, beautiful, intelligent working mother of three children. Educated and articulate, she projects sensibility in the midst of mayhem. One could say she moves serenely in the eye of the hurricane. Her vocal support of women’s business development programs and childcare issues is commendable but is our perception representative of the reality? Let’s face it, Ivanka is someone who may have been working for Daddy’s businesses when she was still in a training bra, MC’ing his beauty contests and walking around construction sites in designer jeans and jewelry, but she lives in a parallel universe. Her life is and never has been anything like what we mere mortals experience.

I first experienced doubts about my faith in her when Donald Trump was campaigning. Ivanka appeared immune to the obvious examples of his shortcomings, the blatant lies, the sexism, racism and the incongruities. His cabinet choices of old, white rich guys speaks volumes. Understandably, she knows criticism is part of the package but she didn’t seem to be relaying these concerns to her father. Or, more likely, he wouldn’t listen.

She was invited by German Chancellor Angela Merkel to be a guest panelist at the 2017 W20 Women’s Summit in Berlin recently. When called upon to comment on her father’s disregard for women and minorities, Ivanka understandably defended him by referring to his track record of promoting women within his own organization. The resulting hisses and boos from the audience knocked her off balance for a mere split second. Then, she switched into full-on offensive mode, disregarding the perception of the majority of women.

The truth is self-evident. Trump does not hold women in high regard with the possible exception of his exceptional daughter. Notwithstanding the position of power held by Kelley Anne Conway within his organization, Donald Trump’s track record is dismal and verifiable. My opinion of Ivanka dropped like a rock when I witnessed her reaction to the criticism. When I saw the horror on her face at the suggestion he was a misogynist and how she immediately slipped into her own fantasy-based world of daddy-worship, I was disappointed, to say the least. Perhaps I was naive in hoping she would acknowledge he needs to listen to the criticism and work on improving his attitude and behaviours.

Trump’s statement “no one in the world has more respect for women than I do” is meaningless. His lingo, always delivered in sweeping superlatives is not backed up by fact and affirmative action. I was hoping Ivanka would be the voice of reason whispering sense into the ear of an unreasonable man. What I saw was life viewed by a disillusioned woman on the other side of a gold-plated one-way mirror. And it doesn’t look good for all the other women who are on our side. If we can reach her, we can only hope she will reach him. But I wouldn’t bet on it.

I don’t think being raised privileged gives one a “perfect world” by any means and I am sure comes with it’s own set of life problems which many of us cannot relate. Her first challenge is having a rich and powerful “Archie Bunker” for a dad, not to mention the beauty of her mother. I can’t imagine the pressure of growing up in that household or the expectations. She could spend the rest of her life trying to defend what comes out of her dad’s mouth but has chosen to take the “high road”. Thank heavens I have never had… Read more »

Didn’t mean to suggest her life is perfect but she chose the high profile – unlike her mother the last few years and wife #2, Marla Maples. They’re pretty much invisible. Or perhaps Trump paid them to be quiet. You’re more sympathetic than I am and I appreciate your thoughtful comments. You should have your own blog! Â Lynda Davis Follow my blog at: http://www.boomerbroadcast.net Social commentary on life from a Boomer Broad’s perspective e-mail: lyndadavis1@yahoo.ca For further insights into the Boomer perspective on business, fashion, mind and body, order my new book, BOOMERBROADcast. It makes a great hostess, birthday or… Read more »

I think she’s shallow, vapid, narcissistic and entitled. Given everything all her life by her father who crushes on her, including the only job she’s ever had, she’s never for a moment had to worry about paying rent, feeding her children, putting gas in the car or even surviving a job interview. No respect or admiration for this leech. I have no respect for her since she’s never struggled, never competed, never worried about anything for a second or had to solve any kind of hard problem. She’s been adored and handed everything in her life on a solid gold… Read more »

She’s definitely out of touch with how real people live and that’s not a good thing. Scary times ahead. Thanks for your comment. Â Lynda Davis Follow my blog at: http://www.boomerbroadcast.net Social commentary on life from a Boomer Broad’s perspective e-mail: lyndadavis1@yahoo.ca For further insights into the Boomer perspective on business, fashion, mind and body, order my new book, BOOMERBROADcast. It makes a great hostess, birthday or Christmas gift. Click on this link: http://www.lulu.comÂ  orÂ http://www.amazon.com

I never perceived her as all that intelligent, articulate or even beautiful, particularly since at the very least she has had several rhinoplastys and now also sports massive veneers that make speech rather difficult for her. And of course the massive implants!
When she was interviewed as a teenager she was asked if she knew anyone who wasn’t rich. She responded by making a face. Nothing has changed.

You pegged her more acccurately than I did, right from the beginning. Thanks for your comments. Â Lynda Davis Follow my blog at: http://www.boomerbroadcast.net Social commentary on life from a Boomer Broad’s perspective e-mail: lyndadavis1@yahoo.ca For further insights into the Boomer perspective on business, fashion, mind and body, order my new book, BOOMERBROADcast. It makes a great hostess, birthday or Christmas gift. Click on this link: http://www.lulu.comÂ  orÂ http://www.amazon.com

I couldn’t agree more. She was not effective at all in her response to the hissing and the fact that she defends him so strongly has cast her in a different light. I always wonder what she is really really thinking…

I think she was the last hope. Alas! Â Lynda Davis Follow my blog at: http://www.boomerbroadcast.net Social commentary on life from a Boomer Broad’s perspective e-mail: lyndadavis1@yahoo.ca For further insights into the Boomer perspective on business, fashion, mind and body, order my new book, BOOMERBROADcast. It makes a great hostess, birthday or Christmas gift. Click on this link: http://www.lulu.comÂ  orÂ http://www.amazon.com