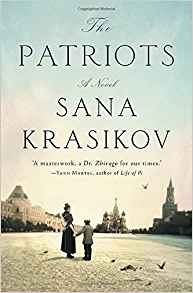 It’s so satisfying to become engrossed in a big fat book you really enjoy. The Patriots by Russian-born author Sana Krasikov more than satisfied my current passion for historical fiction by Russian authors. The main character Florence Fein is a Jewish intellectual who grew up in Brooklyn, New York in the 1930s. Educated and adventuresome, Florence becomes enamoured with communist philosophy while working for a left-wing organization when she finishes college. After falling in love with a Russian engineer visiting on a state-sponsored mission, she sets sail for Russia in hopes of finding him and building a new life in the land of her naive dreams.

Rejected by her Russian lover, Florence moves on and her language skills allow her to work in her new country. Despite the hardships endured by common working people like Florence during the Stalin years, she embraces her new culture and pursues her ideals. The story moves back and forth between her early years in Russia and the year 2008 when her American son and grandson are confronted with the consequences of her choices.

The story provides an informed look inside the daily lives of ordinary Russian citizens under Stalin. The purges, deprivations and injustices force people to live in a state of constant fear. The slightest infraction or even perceived misinterpretation of ever-changing philosophy could result in imprisonment in a labour camp in Siberia, or more likely death. Florence tries vainly to play by the rules. She marries, has a child and works at whatever job she is given in order to maintain a degree of equilibrium in her life. Despite intermittent spells of homesickness, she remains loyal to the communist ideology, even after the government confiscates her American passport and she becomes an unwilling Soviet citizen.

Like many multi-generational sagas, the story circles from Moscow back to New York where her son and his family choose to immigrate as a result of being denied his doctoral degree because of quotas against Jews. Florence is a complicated woman, made more so by the challenges of trying to stay alive and live a simple life in Russia. It’s difficult for North Americans to imagine living under the pressures and stresses of a society built around intimidation, constant surveillance, corruption and lies (although we’re learning). The plot of the story is fascinating in itself, but the psychological examination of the characters adds an even deeper layer to the narrative. As much as I loved the book, I was sorry to finish and leave behind the characters in whom I’d become so invested. I highly recommend The Patriots. I’d give it a nine out of ten.

To order The Patriots by Sana Krasikov from Amazon, click here.

Hi Lynda. I just read your review and would love to read the book. Did you buy it or did you read it online? If you have a copy of it, may I borrow it?

Sent from my iPhone

I downloaded it from Mississauga library up the street and read it on my iPad. If you go up to the library and join (it’s free) I can help you set up your iPad for downloading.