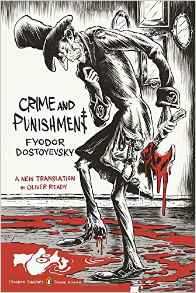 There should be some kind of award for accomplishing items on your bucket list. Surely we’re entitled to a pair of new shoes for losing twenty pounds or treating ourselves to a spa day for running a marathon. That’s exactly how I’m feeling after having just finished reading Crime and Punishment by Fydor Dostoyevsky. Believe it or nor, reading that book was on my bucket list and I did it. Many of us have lists that includes such pleasures as visiting Paris in the springtime, writing a best-selling novel or hitting a hole-in-one. Perhaps our ambitions are as mundane as cleaning out the junk in the basement or finally paying off our Visa bill.Â That surely deserves a dinner out, paid for in cash of course. Not everything on our bucket list is necessarily pleasurable but it should be rewarding. For me, reading Dostoyevsky’s Crime and Punishment was one of those things.

The obvious question is why would I subject myself to such brutality? It’s simple. Like someone running a marathon or climbing a mountain, it was there and demanded to be done. As an inveterate reader I felt challenged to add more classic Russian literature to my repertoire. Dostoyevsky’s Crime and Punishment kept dangling across my field of vision as a goal to be achieved. To complete my troika of classic Russian authors (having also read Tolstoy) I’m now reading Anton Chekov”s Sakhalin Island, but I’ll tell you more about that in a future posting.

I’m certainly not an academic and my take on Crime and Punishment is purely that of an amateur, but overall, I rather enjoyed it. I loved occupying the minds and lifestyles of people who lived in St. Petersburg one hundred and fifty years ago. The characters’ names in Russian literature are always challenging to follow as their names take many forms and are constantly switched about. For instance, the main character’s name has several variations: Raskolnikov, Rodion, Rodka, Rody, Romanovich, (not unlike our treatment of David as Dave, Davey or David) and all the characters names have similar variations which can be confusing.

Raskolnikov is a poor, starving university dropout who, during a period of melancholy and illness, murders a local money-lender and her half-sister during a robbery. The plot takes second place to the psychological study of Raskolnikov’s motives and rationale for committing the crime. The dilemma is relevant and worth considering. Using Napoleon as his moral compass, Raskolnikov attempts to rationalize murder as an acceptable action when committed for the higher good. If leaders of countries can justify war and killing to conquer foreign lands and defeat so-called enemies, how could a simple student be wrong in murdering an evil loan shark, despised by everyone? This premise is eerily relevant in view of the current political situation in our world today. When is killing justifiable and when is it murder? Is it ever justifiable?

It was a slow and tedious but worthwhile read. The thing I enjoyed most about the book was what I also enjoyed about Anna Karenina by Leo Tolstoy. The minute detail about daily life in Russia transported me to a time and place I will never experience. Graphic descriptions of apartments, rooming houses, the clothing worn by ordinary Russians, conversations in period dialogue that reflect the thoughts, philosophy, sense of humour and worries of the characters was rich and evocative. Now that I have Crime and Punishment under my belt, I’m seriously contemplating tackling Ulysses by James Joyce, but I’m in no hurry. In the meantime I think at the very least I’ve earned a DQ Blizzard or something equally decadent. Don’t you agree?

Click here to order Crime and Punishment by Fyodor Dostoyevsky from Amazon.