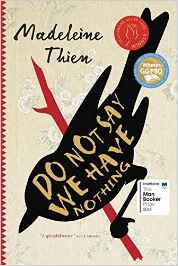 I don’t always agree with the judges’ selections for the annual ScotiaBank Giller Prize for Fiction, but this year they nailed it. Book lovers can relate to the delicious feeling of being so engrossed in a good book that the rest of the world ceases to exist until that book is finished. That’s how I felt reading Do Not Say We Have Nothing by Canadian author Madelaine Thien. On one hand I feel I’m wasting time buried in a book, but how is that possible when that same book is taking me to foreign countries, immersing me in other cultures and expanding my world far beyond any of my everyday life experiences.

The story begins in the first person narrative with Marie describing her life in Vancouver living with her mother following the suicide of her father in Hong Kong several years earlier. Then, an enigmatic relative by the name of Ai-ming who is only slightly older than Marie arrives under suspicious circumstances from mainland China. Her presence raises questions, unfolding the story of Marie’s family history that is reflective of the various cultural, economic and social purges instituted by Mao Tse Tung in the mid-twentieth century.

Written in memoir style along historical fiction plot lines, we are introduced to Marie’s distant family in China. Their struggles, secrets and suffering are described in exquisite detail to the degree we feel like we’re reading non-fiction. This book reminded me of Wild Swans, a wonderful non-fiction book about three generations of twentieth century women in China by Jung Chang which I read several years ago. Both books bring home the cruel and senseless denunciations, murder, starvation and relocation of millions of people under Chairman Mao Tse Tung for decades.

The characters’ lives are strongly shaped around their love and participation in the world of classical music which was at various times banned in China. The author writes sensitively and with a deep intellectual understanding of music that is far above and beyond anything I possess. Some readers will find the detailed references to the deeper meanings of music to be tedious (I certainly did) but it’s worth slogging through the boring bits. The fact that Beethoven’s fifth movement does not refer to his bowels is the extent of my understanding of classical music but that does not preclude readers enjoying the references. The characters are complex, relatable and beautifully detailed with colourful names like Big Mother Knife, Little Sparrow and Old Cat. Thien imbues certain characters with a sense of humour and their wisdom is displayed in dialogue with strong, clear metaphors. She also makes use of Chinese symbols to explain and help the reader understand the nuances of language. Personally, I think the book could have used some tighter editing but overall I enjoyed it and plan to read more by Madelaine Thien.

Click here to order Do Not Say We Have Nothing by Madelaine Thein from Amazon:

Click here to order a copy of Wild Swans by Jung Chang from Amazon.