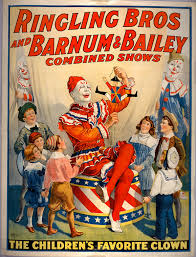 This is not about the new Trump administration, although they do share the elephant logo and are equally prone to bizarre acts of illusion and deception. It’s about the Ringling Brothers and Barnum & Bailey variety of circus, which will soon be phased out because the high costs of production could not be recouped in ticket sales. I may be in the minority but I am not disappointed to see the end of circuses. As a child, going to the circus was never a fun and magical day for me. The acrobats made me nervous and the clowns weren’t particularly funny. But the thing that upset me the most, in fact it made me feel ill, was the undignified treatment of the animals. It was heartbreaking to see lions and tigers penned up in small cages until it was their turn to be whipped into doing stupid tricks. Elephants being coerced from the time they were babies to perform undignified stunts in silly costumes for the amusement of the popcorn-eating public made me hate the entire spectacle.

Cirque de Soleil occupies a slightly different position on the entertainment spectrum than animal acts. Like many other people, I have marveled at the performers’ seemingly impossible feats of athleticism in stunning costumes that dazzle and amaze. Cirque’s feats still make me nervous but they don’t evoke the kind of discomfort and even stress I felt watching old-time circus performers. The Barnum & Bailey promoters blamed the loss of elephants from their lineup as being the cause of diminished attendance but, who really knows? All I know is that the time for eliminating the use of animals for the entertainment of the ticket-buying public is long overdue. Hopefully, many zoos and marine parks will be next. There are more natural and dignified ways of protecting wildlife than putting them on display doing tricks for our amusement. We are not amused and the fact the circus is not coming to town is a cause for celebration.

Visiting the Ringling Museum in Sarasota, Florida is an experience in itself and something to be cherished……I had no idea of the work involved in a circus or what was required as it travelled the countryside…..their miniature model of what a circus is all about sure opened my eyes to the wonder of this extravaganza as it travelled through the countryside……the number of people involved in the background working behind the scenes, How they moved the animals, fed the animals, performers and crew….the equipment needed, the size of the tents, and the hours of work required to set the entire… Read more »

I agree with you on all points. Circuses were amazing for all sorts of reasons and they had a lot of positive aspects, but the animals just upset me at a gut level. I know I’m in the minority. Appreciate your thoughtful feedback. Â Lynda Davis Follow my blog at: http://www.boomerbroadcast.net Social commentary on life from a Boomer Broad’s perspective e-mail: lyndadavis1@yahoo.ca For further insights into the Boomer perspective on business, fashion, mind and body, order my new book, BOOMERBROADcast. It makes a great hostess, birthday or Christmas gift. Click on this link: http://www.lulu.comÂ  orÂ http://www.amazon.com

Linda, Linda, Linda, All of Sarasota, Bradenton Venice,Gibsonton and surrounding area are circus people. My back door opened to the train when it was in town. I loved it when they marched the animals thru my parking lot. Even enjoyed the picking up the poop after they were gone. It was the Spirit of the circus when they were “home” for a month or two. And I must say the animals were WELL taken care of. They had it great. And they knew it. One time I looked up and this huge bear was standing in my office. They loved… Read more »

I knew there’d be some backlash from the west coast Florida community. The circus is an important part of Sarasota history and still is. I appreciate your thoughtful feedback, Mike and hope you’ll keep reading. We agree on way more issues than we disagree on. Thanks. Â Lynda Davis Follow my blog at: http://www.boomerbroadcast.net Social commentary on life from a Boomer Broad’s perspective e-mail: lyndadavis1@yahoo.ca For further insights into the Boomer perspective on business, fashion, mind and body, order my new book, BOOMERBROADcast. It makes a great hostess, birthday or Christmas gift. Click on this link: http://www.lulu.comÂ  orÂ http://www.amazon.com