Where’s a John F. Kennedy or a Franklin Roosevelt when the American people really need one. After watching the Trump/Clinton debate last night, I came away with one thought: thank heaven I don’t have to cast a vote in the American election. I wouldn’t want to bear any responsibility for the future of the United States based on my choice on election day. Whatever the outcome, the results are going to be scary for the American people, although I would love to be proven wrong.Â  It’s amazing how they arrived at two equally disliked candidates, but that’s democracy at work. I can see the book just waiting to be written: “The Rise and Fall of the United States of America”.

Then, this morning I burst out laughing when I read the editorial cartoon in today’s Globe and Mail called “Pick one” by Brian Gable. I couldn’t have said it better. 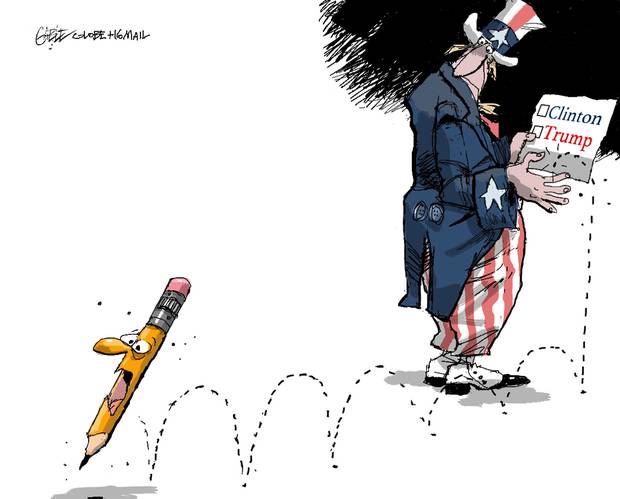 Many of Obama’s hopes & dreams for improving America were blocked by the Republicans and now Trump leads their party…….democracy at its worse. Maybe a dose of Trump is what America needs. In a few years, Americans will realized just how great Obama was as their President.

Hillary certainly has her faults but she thinks complete thoughts and speaks in completed sentences.
People have the option of agreeing or disagreeing with her.
Trump thinks money and talks in words.

She’s certainly the better choice. Either way, it’s going to be interesting.

It must be really great watching this US election unfold from so far, yet so near. For the first time since I became an American citizen, I wish I didn’t have to vote. You’re right Lynda , it’s scary. I already wrote on my website why I think it would be more than scary if Trump became President of US. My article is Trump, Brexit and the Politics of Hate at http://www.joannaelm.com. Wonder if you, or any of your readers would agree with me?

Brilliant! And your commentary is right on.