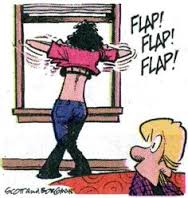 Just like the Bristol Stool Chart which has seven categories to describe bowel movements, science has now miraculously come up with a similar grading system for the levels of hot flashes experienced by women in mid-life. It’s called the SWAN (Study of Women’s Health Across the Nation) study. This revelation is hardly genius or new as most women have known for centuries that there are different levels of suffering from whew to hose-me-down-immediately-before-I-ignite. For the record, here’s what the experts came up with to describe the varying degrees of hot flashes:

Sadly, I fall into the fourth category, along with most of my friends. I’ve been having hot flashes for more than twenty years now and don’t see an end in sight. At their worst in my late forties, I experienced them several times each hour, 24/7. Combined with lack of sleep and gaining twenty pounds, I was a wreck until hormone therapy miraculously and immediately allowed me to function like a normal human being again. But the memories remain. I clearly recall sitting in my office at work with rivers of sweat running down my spine, my neck, my chest, my scalp, even the fronts of my legs in pantyhose. I was a walking, talking nuclear meltdown.

I personally know of only one person who did not get hot flashes and believe me, she’s an anomaly. The rest of us are veterans. Years ago we tossed blankets and duvets, started dressing in easily removable layers, installed ceiling fans in every room of our homes, and permanently turned down the thermostat. What no one tells young women is that hot flashes are not necessarily a temporary inconvenience lasting a few months or maybe a year. More than twenty years later, I still get them although they’ve been reduced to three or four a day. I remember chatting with a woman in her eighties at my mother-in-law’s funeral who said she still gets them. Not encouraging.

The experts have further categorized the degree of severity according to race, weight and cholesterol levels. But as any Boomer woman knows, we don’t need SWAN or genealogical charts to track our discomfort. We need fans, ice packs, breathable light clothing and occasionally a fire hose. If the energy we emit during a hot flash could be corralled into reusable power, there would be no more nuclear plants, inefficient windmills in farmers’ fields or insane hydro bills. It totally would solve our energy crisis but until men start having hot flashes, we’ll just have to power through and keep running the air conditioning in winter. There’s no measure of comfort but relief.

I wouldn’t have thought of blogging about an everyday topic like flashes but they do infringe on your life. After 2 years of holding ‘from-the-freezer’ pop cans on my neck and many days of ‘well over 100’ flashes, I succumbed to HRT for 7 years.
Work and life became enjoyable again. Younger readers, don’t despair. Time eases severity.

I also did HRT for seven years. Wouldn’t have been able to function and go to work every day otherwise.

Hi Lynda, I meant to send you a note saying how sorry I was to hear about the robbery – your wallet being stolen. You were very smart in having your cash etc separate from credit cards and other important cards. I was pick pocketed once too but it’s s long time ago. It is an awful feeling for sure. See you on the 13th for the Scenic event! Lola

Get Outlook for iOS

Thanks Lola. See you soon.

When young, we used to call the area of the office where our senior admin assistants worked on our executive floor “menopause alley”…..little did I realize what they were going through back then…..not just the sweats but the lack of sleep it causes……no wonder they were so cranky. I used anything herbal to control mine until I retired and then decided to let nature just take over. After 12 years, they have not gone away but have slowed down drastically…….better than the side effects of HRT.
Gail from Oakville

We learn too late . . . judge not! Thanks. Â Lynda Davis Follow my blog at: http://www.boomerbroadcast.net Social commentary on life from a Boomer Broad’s perspective e-mail: lyndadavis1@yahoo.ca For further insights into the Boomer perspective on business, fashion, mind and body, order my new book, BOOMERBROADcast. It makes a great hostess, birthday or Christmas gift. Click on this link: http://www.lulu.comÂ  orÂ http://www.amazon.com