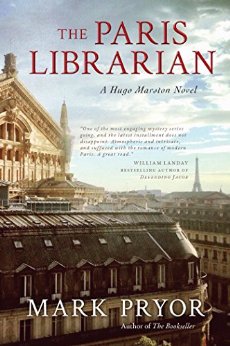 Any book with the word Paris in the title automatically goes on my “To Read” list. This has resulted in my venturing into murder mysteries which is not my normal choice for reading material and The Paris Librarian by Mark Pryor was a nice little break. American Embassy security agent Hugo Marston enlists the help of his librarian friend Paul Rogers at the American Library in Paris, to source rare and affordable books for his collection. When he learns Rogers is curating the papers of Isabelle Severin, a famous ex-pat actress who has lived in Paris since the days of Josephine Baker, he is caught up in a swirl of intrigue about her alleged spying activities during the Second World War. Did she really murder a senior Gestapo officer with a dagger? Where is the dagger now? Will her secrets be revealed in her papers after she dies?

Paul Rogers is then found dead of questionable causes in his basement library writing room. Soon the murders are piling up and we’re wondering how all these people died, who killed them, why and what does this have to do with the mysterious Isabelle Severin who is suffering dementia in a French retirement home.

I didn’t realize this is part of a series of Hugo Marston mystery books and perhaps it would have been more enjoyable if I’d known the main character a little better. The plot was a bit slow and I was disappointed that it didn’t focus more on the nefarious actions of Isabelle Severin during the war instead of on other characters with their own secrets. Nevertheless, as noted above, anything about Paris always has something worthwhile reading about. I enjoyed the characters’ activities centred mainly in the sixth and seventh arondissement near the Eiffel Tower. Having stayed in that area once on a trip, I was able to mentally picture the streets and local landmarks described in The Paris Librarian. It was a fast and easy read. The fact I think it could have been better is more a result of my greater interest in historical fiction than contemporary murder mystery.