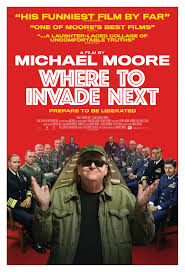 Why did it take me so long to finally get around to watching Michael Moore’s documentary film titled “Where To Invade Next”? I’ve long been a fan of his insightful and hard-hitting films exposing what many Americans fail or more likely just refuse to see as truths. His tenacity and honesty challenges the myth that the United States is the greatest country in the world (when, in fact, statistics say it’s Denmark). Moore’s latest mission takes him to various countries around the globe to source and bring home practices not yet recognized in the United States as being “a better way”.

Moore begins his hypothetical invasion by visiting Finland where the quality of education was once tied with the United States at an abysmal twenty-ninth place in the world. By making education enjoyable and encompassing concepts beyond readin’, writin’ and ‘rithmatic, the Finns have elevated their outcomes to highest in the world. High school students interviewed by Moore were fluent in several languages and spoke English easily and articulately. Two of the cornerstones in the turnaround involved NO homework and more play time from the early years in school. Children are encouraged to be creative with their free time and enjoy their childhood. Holy shit. What a concept. And it’s definitely working for the Finns.

Socialist France regularly provides four-course student lunches that would compete with any four-star restaurant. These lunches are not the fries and Mac n’Cheese fare washed down with a Coke offered at most North American school cafeterias. The French have chefs at each school and the menus are submitted to and approved ahead of time by local authorities to ensure they are healthy and prepared with fresh produce daily. Several varieties of cheese are offered as well as lamb, pork, beef and poultry with sides of fresh vegetables, fruit and a dessert. And the beverage? Plain, old, not-loaded-with-sugar-and-preservatives water, served in glasses, not plastic cups. The food is also served on real dishes and cutlery (not disposable plastic) using the opportunity to teach students other skills like table manners, sharing and the art of conversation.

Norway’s maximum security prison has private rooms for inmates who possess their own door keys providing a level of personal dignity that is often missing in the “outside world”. The emphasis is on supporting and teaching inmates a value system based on respect, consideration and decency, concepts far removed from North American institutions. Prison guards are not armed and none of the inmates interviewed had suffered brutality, rape or other abuses rampant in North American prisons.

Obviously, these countries are not utopia. They have their share of problems and are not perfect. Moore admits this in his documentary but the point he’s making is that there is so much wrong with America’s approach to education, crime, drugs, welfare and social issues that they should take off the blinders and look beyond their own borders to see how the rest of the world functions and perhaps learn. If you’ve ever traveled to the United States you know that television news there is focused totally within their borders, as if the rest of the world doesn’t exist. Most Americans have no idea what is going on in Germany, Muslim Tunisia, Iceland or Asia. In fact, they could learn from Iceland where male corporate bankers who bankrupted the country were put in jail in a remote area isolated from family and society. The country was then turned over to women who got the economy back on track. Compare that to the United States who indicted only one banker after the 2008 fiasco.

When is Michael Moore going to invade Canada?

Strangely, though, there was nothing in this documentary from Canada worth hijacking. We know Americans love our bacon but we have much more than that to offer. Let’s assume he’s planning an all-out attack on Canadaâ€”a full-on invasion worthy of a documentary all its own. Now that would be something fascinating to see. Imagine Michael Moore looking into our universal health care system, minority rights, our prisons, the ethics of our government, our educational institutions, or even the relative health and social merits of Tim Horton’s. Would our immigration policies pass muster? What about the treatment of our indigenous people trying to survive on isolated, poorly-serviced reserves, our propensity for politeness (hockey games excluded)? We’re not all igloos and cold fronts and Michael Moore’s perspective could provide some interesting perspective.

There’s plenty more to appreciate in Where To Invade Next. Pour yourself a glass of wine or make a BLT, sit back in your LaZ-Girl chair and watchÂ it on Netflix or pay-per-view. You’ll be educated, informed, entertained and rewarded. Once again, Moore brings home his message masterfully.