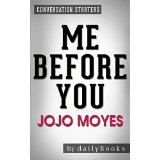 I had some concerns about reading Me Before You by Jojo Moyes because the subject matter didn’t sound like something I would really enjoy. The story is mainly told in the voice of Louise Clark, a British waitress who is single, twenty-six years old and still living in her village with her parents because they need the additional income to support the family, which includes her single-mother sister. When Louise suddenly loses her job at the Buttered Bun CafÃ©, the financial pressure on the family forces her into accepting the unlikely position of employment as assistant care-giver to a quadriplegic in his mid-thirties, Will Traynor.

Prior to being paralysed when he was struck by a motorbike, Traynor was a wealthyÂ  financial deal-maker, adventurer and bon vivant who lived life in a world completely foreign to Louise Clark, despite being born in the same village. Louise lacked ambition and curiosity and was content to serve coffee and buns in the village cafÃ©. When she applies for the job as assistant care-giver to Will Traynor the challenges of his personality and circumstances stretch her boundaries and expand her potential to become a stronger, more focussed individual. 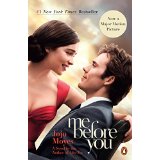 Me Before You is a love story about Louise and Will with significant and informed insights into the challenges faced by quadriplegics and those who love them. While I found the story a bit sappy at times, the writing is easy to read and the plot line kept me engaged most of the time. I did lose interest about three-quarters of the way through the book when the ending seemed predictable but I’m glad I finished it as I really didn’t want to leave the lives of the characters dangling without knowing for sure how it ended. The book addresses assisted suicide objectively and intelligently which is relevant since a law about the issue is currently before the Canadian parliament.

Overall, I enjoyed the book but I hardly think the content warrants a movie so I doubt I’ll go see it. I don’t like to read third-party reviews of a book until I’ve clearly drawn my own conclusions. Upon checking existing reviews of Me Before You the line seems to be drawn down the middle with some clearly hating the book and others loving it. I’m somewhere in the middle. I’m not a fan of romance novels and I found the fact that the Will Traynor character was rich and handsome to be rather gratuitous. There would have been no story if he’d been pudgy and poor. And therein lies its weakness. But millions of readers don’t agree with me.

I read this book for my book club. It wasn’t one that I would have normally picked up, but I did enjoy it. I thought the characters were well-drawn and the story line about assisted suicide was thoughtful and well-done. I think I gave it a 7.5 out of 10. I will probably wait to see it on Netflicks, which is what we usually do anyway.

We’re “on the same page”. Thanks for your feedback. Â Lynda Davis Follow my blog at: http://www.boomerbroadcast.net Social commentary on life from a Boomer Broad’s perspective e-mail: lyndadavis1@yahoo.ca For further insights into the Boomer perspective on business, fashion, mind and body, order my new book, BOOMERBROADcast. It makes a great hostess, birthday or Christmas gift. Click on this link: http://www.lulu.comÂ  orÂ http://www.amazon.com

I truly enjoyed “Me Before You” essentially the personal growth of Louise, challenges of Will’s family and that a life worth living is a personal choice. As legislation comes to be the large challenge will be for one human to make the decision on is “a” life worth living. For Will he was able to make his own choice.
I won’t go to see the movie because I think they will screw it up, Hollywood style! The sequel I think it is called “After You” isn’t nearly as thought provoking. Thanks Lynda for sharing your take on this book.
Margaret

Really appreciate your feedback. I love knowing when readers agree or disagree. But more importantly, it’s reassuring to know you’re reading BOOMERBROADcast. Thanks. Â Lynda Davis Follow my blog at: http://www.boomerbroadcast.net Social commentary on life from a Boomer Broad’s perspective e-mail: lyndadavis1@yahoo.ca For further insights into the Boomer perspective on business, fashion, mind and body, order my new book, BOOMERBROADcast. It makes a great hostess, birthday or Christmas gift. Click on this link: http://www.lulu.comÂ  orÂ http://www.amazon.com