Today we have a two-fer. Two movie reviews in one posting because they have similar themesâ€”eccentric ladies of a certain age coping with life. I just saw The Lady in the Van and Hello, My Name is Doris within the past week and both were fun and worth the price of admission. 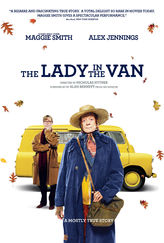 The name Maggie Smith practically guarantees great acting, a worthy plot-line and good writing. Starring as Margaret Sheppard, an elderly bag lady living in her dilapidated van, her character is abrasive, funny, intelligent and unpredictable. Smith is delightful in the role without being over-the-top or pathetic. She parks her van in front of various houses on a particular street in Camden Town until she runs into trouble with parking authorities and accepts the offer of playwright Alan Bennett to park in his driveway. And there she remains, for fifteen years. The Lady In The Van is loosely based on a true story written by Bennett, owner of the driveway and sponsor of the character on which she is based. Alex Jennings, an Elton John look-alike plays Bennett. As a confirmed Anglophile, I loved the movie, which I watched on Pay-Per-View as it didn’t seem to last very long in theatres.

Sally Field plays the lead character in Hello, My Name is DorisÂ about a boomer-aged woman who has dedicated her entire adult life to taking care of her mother while living in her childhood home. She is an odd character, an eccentric dresser but otherwise, one of the drones who toil away at data entry in a small cubicle for a company that keeps her on because she’s pretty much invisible. She reminds me of office girl “Kaaaaiye” played by Tracy Ullman many years ago, for those who remember that wonderful character. When a handsome young new Creative Director shows an interest in her, Doris mistakes his attention for romance and her life takes on a new dimension. Field often over-actsÂ  in this movie but considering the character, it’s understandable. Not an Oscar-worthy movie, but a fun chick-flick. I attended with three girlfriends and we laughed heartily and frequently while tossing back our popcorn and Diet Coke.

There are few movies targeted at the mature Boomer market and for that reason alone we need to support and encourage them. I think you would enjoy both of these movies but I’d love to know your opinion. Let me know.

I loved her so much! So good.

Thanks so much for your feedback. Nice to know someone’s reading. Â Lynda Davis Follow my blog at: http://www.boomerbroadcast.net Social commentary on life from a Boomer Broad’s perspective e-mail: lyndadavis1@yahoo.ca For further insights into the Boomer perspective on business, fashion, mind and body, order my new book, BOOMERBROADcast. It makes a great hostess, birthday or Christmas gift. Click on this link: http://www.lulu.comÂ  orÂ http://www.amazon.com

Great idea pairing these films. Both are very watchable. Maggie Smith is a wonderful study in British eccentricity and Sally Field is great in her sad tale about the invisible woman sydrome and an overreaching lonely old maid. Drop in for a read of my review of both films.

These two movies are on my Netflix list… thank you for the reviews!

Let me know what you think.