My world is collapsing. Just like my hair on a humid day or my self-esteem when I try on a bathing suit. I was devastated to hear that my favourite women’s radio show, Whatever, hosted by Christine Bentley, Kate Wheeler and Sharon Caddy on Sirius Satellite Radio Channel 167 is being cancelled. (Click here to read Sirius. . . we have a problem.) Then, while I was still licking my wounds from that episode I received an email that my favourite magazine,Â MORE will cease publishing with the current April issue. I’ve been a subscriber for more years than I can remember, back to when I still had a waistline. Targeted at mature, Boomer women, MORE is one of the more intelligent, relevant and enjoyable magazines I receiveâ€”and I subscribe to eighteen publications per month. The day it arrives in the mail, I sit down with my cup of tea and read it cover to cover. Even the ads are interesting. Meredith Corporation’s, male president said low advertising revenues could not support further publication.

We’ve all experienced that frustrating sense of loss when a favourite product is discontinued. Who hasn’t mourned EstÃ©e Lauder or LancÃ´me cancelling our favourite shade of lipstick. “But we’re introducing new and better colours/shades/flavours/styles they tell us” in an attempt at consolation. I’m now down to my last tube of Portofino Coral lipstick sourced by Googling every corner of the internet and finally finding a supplier who had two left. Surprisingly, EstÃ©e Lauder still produces Frosted Apricot which I was first introduced to in one of their gift-with-purchase promotions about forty years ago, and is still in rotation.

I’m convinced the entire world is determined to eliminate anything of interest or relevant to Baby Boomers. Despite our huge demographic, we can’t seem to convince “the establishment” that we’re a valued and financially valuable target market. They insist on focusing on the 18-45-year-olds. One by one commercial interests are chipping away at everything we like. My radio programs are being cancelled; movies almost completely ignore our generation; my magazines are now disappearing, and don’t even get me started on fashion.

Thank goodness books are still relatively free of purging by commercially-driven enterprises. While my choices in books may not always be best sellers, at least I can peruse the public library on-line and generally get what I want. Perhaps the 18-45 group doesn’t read books because they’re too busy texting what they had for lunch, and the library doesn’t know how old I really am.

At any rate, Boomers need to be more vocal in our support of what we like. I’ll continue to protest ridiculous fashion trends, zombie and other violent movies and poorly conceived accommodation for aging Boomers. They wouldn’t legalize marijuana when the Boomers were regularly smoking up in the sixties and seventies. However, now that Gen X’ers, Y’s and Millenials have demanded a place at the table, it’s acceptable and soon to be legal. What do Boomers get? Dying with dignity. 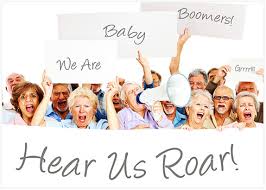 We’re still paying taxes (plenty, in fact, probably too much), interacting and engaging in all kinds of media, dressing for fashion as best we can within our limited selection, and purchasing big-ticket consumer goods at unprecedented levels.Â  However, Boomers are ignored, disregarded, disrespected and generally dissed in the consumer market and it’s time we were acknowledged. What’s next to get axed? Sixties music radio stations? Pinot Grigio? Red Rose Tea?â€”at which time I will be forced to investigate the dying with dignity issue. Ban the Boomers is insidious but it is happening. Speak up and do not forever hold your peace.

Where are real women in the media? | BOOMERBROADcast

[…] my favourite magazine MORE (for mature women) ceased publishing due to lack of advertising revenue (click here for It’s time for some Boomer backlash). The dragnet is widening as Chatelaine and Macleans […]