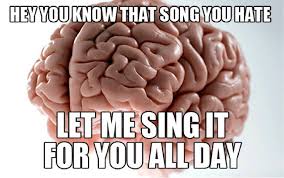 I’m not talking about the kind that require getting into your husbands’ ears with manicure scissors and hacking a path through, or even worse, the kind that require a doctor’s attention. I’m referring to those songs that get stuck in your head and play over and over until you think you’re going to scream. When I was working, it would be the last song I heard on the car radio before I pulled into the underground parking garage at the office.Â  Sweet Caroline by Neil Diamond or Barry Manilow’s Copa Cabana would keep looping through my brain all morning. It made me understand why Van Gough tried to cut off his own ear.

My classic go-to ear worm is Paul McCartney’s When I’m Sixty-Four. That song has been playing over and over in my mind since the days when it was still a nod to the distant future. Decades later, when it’s now become a nostalgic look at the past, it’s still my most persistent default sound track. Often, it’s songs I hate like the theme song from the musical Annie or Frank Sinatra’s New York, New York. Then I have to stop the record, put on a new one and consciously shift gears. Christmas can be the worst time when Burl Ives sets out to drive everyone over the sugar plum edge with Holly Jolly Christmas.

Sixties music is a treasure of big fat juicy ear worms. The music from our youth was and always be the best music ever penned. Right? How could anyone ever top Whiter Shade of Pale by Procol Harum, the gentle harmonies of The Beach Boys’ In My Room or Simon & Garfunkels’ Bridge Over Troubled Water? Then there’s Bob Dylan’s Like a Rolling Stone and anything by The Beatles or the Stones. Do you get ear wormsâ€”the kind that don’t require manicure scissors? Care to share what yours are?

or other social media links below.

Yes it happens to me as well…..sometimes I just wake up with a song and wonder if a car went by in the middle of the night with the song playing which put it in my head while sleeping. I was surprised when my sixteen year old grand daughter announced recently that she has broadened her music beyond Taylor Swift…..she now likes the Beatles and Stones…..I was shocked. Music blending the generation gap….it’s timeless.
Gail from Oakville

‘ya can’t deny greatness. Our music was the best. Although some might disagree, they’re wrong. Â Lynda Davis Follow my blog at: http://www.boomerbroadcast.net Social commentary on life from a Boomer Broad’s perspective e-mail: lyndadavis1@yahoo.ca For further insights into the Boomer perspective on business, fashion, mind and body, order my new book, BOOMERBROADcast. It makes a great hostess, birthday or Christmas gift. Click on this link: http://www.lulu.comÂ  orÂ http://www.amazon.com