A recent article in The New York Times entitled How to Raise a Creative Child questions the merits of over-scheduling, over-programming and over-protecting children. Citing the emergence of natural geniuses like Mozart or Einstein, author Adam Grant questions whether their talents would have seen the light of day if they’d been channeled into strict parent-directed learning pursuits. Early displays of natural talents could be overlooked or squashed by a packed schedule of math tutoring, hockey practice or in today’s world, too much screen time. Einstein once said “True sign of intelligence is not knowledge but imagination.” Think about that.

The business world is now questioning the merits of young people being channeled into narrow career paths that do not allow for seeing a broader picture. Is the preoccupation with computers and smart phones negatively affecting our social and interpersonal skills? Are engineers too focused on logic? Are computer programmers poorly equipped to visualize multi-dimensional solutions? Are teachers out of touch with the business world and its opportunities? Is it time arts degrees received the same respect as maths and sciences. It’s frequently these right-brain thinkers who can be counted on to imagine outside the box and come up with creative solutions and innovative strategies. Left-brainers prefer the tried, tested and proven. Ideally we need both to function in harmony. 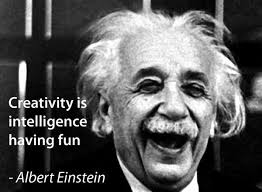 Malcolm Gladwell’s theory of ten thousand hours being required to master any skill has mislead many into thinking repetition is the key to success. Without discounting the importance of practising, however, by focusing too narrowly on one skill or task, the individual is missing the opportunity to bring broader, more creative thinking into play.

Albert Einstein flunked out of his violin classes but his intuitive love of music sparked his curiosity. “The theory of relativity occurred to me by intuition and music is the driving force behind this intuition” he said. If he had spent all his time practising his violin or poring over mathematical formulations at the expense of a more rounded set of life experiences who knows what we might have missed. His left brain was stimulated by right-brain engagement.

Most baby boomers enjoyed a childhood that was relatively free of strictly scheduled activities. Sure, we attended Sunday school, Girl Guides and Scouts, played hockey or bowled on Saturday mornings, but we also had an enormous amount of free time to be creative. Our parents regularly kicked us out the door and told us to find something to do when we said we were bored. So we’d round up a couple of friends and go for a bike ride, draw hopscotch patterns on the sidewalk, pull out skipping ropes or play marbles. Whatever we did, it involved socializing, creativity, physical activity, fresh air and initiative. There was minimal to no supervision and our natural talents and aptitudes ran free. No amount of focused activity can replace what we learn by stepping outside our comfort zone, making mistakes, sometimes failing altogether. Genius is more likely to spring from spontaneous bursts of inspiration rather than rigorous drilling. 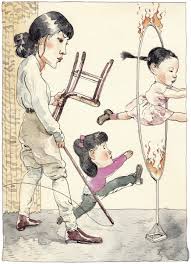 If Tiger Mom Amy Chua (author of Battle Hymn of the Tiger Mother) had delivered me as her daughter, I’m not confident she would have been able to assimilate the material needed to write a book about her project. There has been endless speculation, criticism and some admiration for Chua’s condemnation of western parenting styles and her espousing of the so-called Chinese method which stresses strict discipline, mastery of music, minimal peer socialization and above all, high scholastic achievement. Had she been my mother, well, let’s just say it would have been a rough ride for both of us.

While I cannot argue the merits of raising a child who excels, the rigorous schedule of music lessons and practising, studying and super-achieving leaves little time for daydreaming or creative play which are essential to growth and development as a well-rounded human being. Baby boomers enjoyed buckets of free time to ride our bikes around town, build forts out of blankets, sticks and clothespins, skate in frozen ditches, toboggan down nearby hills, play pretend games and otherwise create our own fun. We generally ran with a pack of other boomers in the neighbourhood whose parents were equally casual about what we did with our time, as long as we were home for supper or before the street lights went on. The most expensive games or toys we ever owned were Monopoly or Scrabble and they were generally reserved for rainy days or summer camping trips with the family.

As a confirmed right-brain thinker I probably would have not only been a disappointment to Tiger Mom Amy Chua but a possible felon. Our parents certainly had admirable expectations for our outcome and imposed rules and discipline. They raised us with the best of intentions but they frequently just let us blow with the wind. Sometimes we crashed; often we soared. But mostly we just floated along enjoying the ride, for better or worse. And for that I am truly grateful, from both sides of my brain, especially the left-handed, right-brained one. 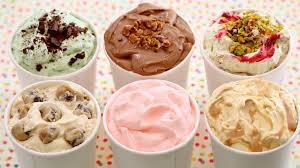