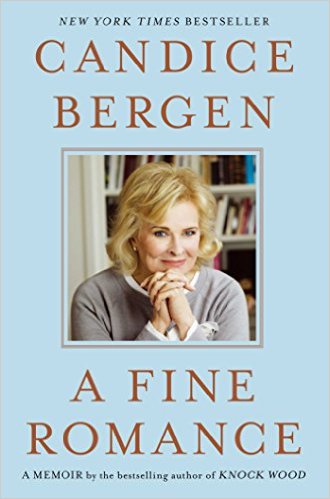 Boomer gals universally looked up to Murphy Brown as our hero and inspiration from 1988 to 1998. She was gorgeous but consistently dateless; smart but frequently inept; strong yet oddly vulnerable; in short she was an interesting, flawed and relatable character. Much like ourselves. Candice Bergen, who played Murphy Brown possessed some of these characteristics but playing Murphy with all her faults and fabulousness was the definitive role for which she will always be remembered. A Fine Romance is Bergen’s account of her life as a mature actor, her courtship and marriage to award-winning French movie director Louis Malle, motherhood, being widowed and building a new life, then marrying again later in life.

Born to a beautiful young mother and Swedish father, Edgar Bergen, who was famous himself in the entertainment business as the ventriloquist who brought us Charlie McCarthy, Candice Bergen grew up in a privileged environment. As a young woman she modeled, worked as a photographer for Esquire magazine and played supporting roles in several movies. It wasn’t until she was cast as Murphy Brown that she hit her stride and became the touchstone for a generation of Boomer women.

A Fine Romance is a fascinating read by a woman who is honest, intelligent and self-deprecating. Bergen is forthright in admitting to her shortcomings and mistakes. She suffered serious empty-nest syndrome when her only child, Chloe went off to college, acknowledging the value of her supportive network of girlfriends. “And thank God for my friends. Mothers in their fiftiesâ€”running to beefy now, the traditional thickening through the middleâ€”we clumped together in our middle-age camouflage: black pants, long sleeves. . . . compensating with wit, attention, intelligence, experience. Bringing to bear not the extra fifteen, twenty pounds we all seemed to be packing but our confidence in who we were. The sizable weight and force of our personalities.” We all understand the importance of girlfriends.

Bergen is also a dog lover which endeared her to me even more. In fact, she acquired one of her dogs, a Golden Doodle named Jerry, from a Mennonite breeder near St. Jacob’s west of Toronto, driving up herself to pick him up and take him home. What further impressed me was the opening paragraph in one of her later chapters: “Let me just come right out and say it. I am fat. In the past fifteen years, since I’ve married Marshall, I have put on thirty pounds.”Â  She also mourns the loss of her once-luxuriant full head of hair, “because if my hair isn’t fluffy on this pea-sized head, I look like a golf ball on an enormous buoy.”Â It seems I’m not the only Boomer woman who worries about getting fat and going bald. Who can’t relate to that and admire her honesty.

In describing her marriages to Louis Malle and later to Marshall Rose, Bergen is frank in describing the high, lows and in-betweens. When Malle died, she devoted herself to being the best mother possible to their daughter Chloe and is justifiably proud of the fact Chloe grew into a caring, smart and capable woman in her own right. Many of the struggles Bergen endured are not that different from what each of us has experienced over the years with career, aging parents, loss of a partner and life’s disappointments. While she moved in socio-economic circles very different from most of us, her story confirms that life is complicated for everyone, including Murphy Brown and Candice Bergen. The book was an absolute joy to read. Although it seemed a bit slow at the beginning, once she got into the specifics of her life and its various iterations, it was totally engrossing. I highly recommend it.

Thank you for the recommendation! I wasn’t aware that she had written a memoir but I hold the same affection for her that so many of us female (and male!) boomers had. She was/is a force.

Happy to be of service. Â Lynda Davis Follow my blog at: http://www.boomerbroadcast.net Social commentary on life from a Boomer Broad’s perspective e-mail: lyndadavis1@yahoo.ca For further insights into the Boomer perspective on business, fashion, mind and body, order my new book, BOOMERBROADcast. It makes a great hostess, birthday or Christmas gift. Click on this link: http://www.lulu.comÂ  orÂ http://www.amazon.com

Love reading your reviews, I never have to think about what to read next. I’m on hold for A Fine Romance at the library. Thanks so much and do keep the reviews coming!