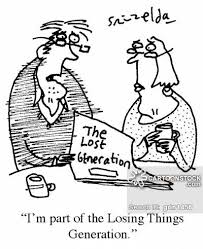 Please tell me I’m not the only one who can’t find my car keys, sometimes forgets the names of people I’ve known for years or can never remember my home phone number. Even reading a recipe clipped to the microwave right in front of my face requires dozens of visual checks to make sure I’m not forgetting an ingredient or a step in the process. The other day I zigged when I should have zagged and yesterday I nearly poured orange juice into my cereal. Other menolapses described in an earlier blog (click here for I’m not OK; Are you OK?) combined with some recent ones had me questioning my sanity. Happily, there’s an explanation.

Apparently, human intelligence does not necessarily diminish as we age; it’s simply a matter of pushing out the old stuff in our brains to make room for the input of new data. It’s simple decluttering. We’re not getting stupider; we’re merely pushing aside all those useless French verb conjugations and spelling tricks we learned in school, or even the title of the last book we read to make way for new information. Whew! Now I can sleep at night and not worry that I’m losing my marbles as I get older.

My male Boomer friends, who long ago forgot how to read a map, are amazingly proficient at knowing every baseball, football and hockey players’ stats across the board, which is an impressive level of intellectual compensation. My honey can watch twelve hours of non-stop football on television and recall every play, every goal, and every player’s strategy. And he can remember every stroke on every hole while watching pro golf. But it comes at a price. That input of data has displaced his ability to remember my birthday, spell simple words or even employ the elementary school phonics required to sound it out. Amazing how that works.

We can now forgive our Boomer guys for not remembering to say “I love you” as much as they should because their relevant love brain cells have been overtaken by greater issues like the comparative cost of a 55-inch big screen TV versus a 60-inch in relation to its specified mega-Hz. Or, what about the ability to do the math surrounding the cost-benefits of purchasing a car. That intelligence has conveniently been replaced by “It’s new; it’s shiny; it parks itself and has lots of toys. Let’s just get it!” And it’s wonderful that cars can now park themselves because our long-ago lessons on parallel parking were pushed aside to make room for how to operate the new GPS system.

Similar cranial overload has also created a high demand for simple “On/Off” thermostats at Canadian Tire because most boomers can’t figure out how to program the fancy new programmable ones. There’s just too much data to cram in. That means I may never learn how to pay for purchases by swiping my iPhone, because first I’d have to get an iPhone and then learn how to use it. To do that, I’d have to brain dump some of the lyrics for all that sixties music still rocking and rolling around in my personal cranial cloud, which is something I don’t foresee happening any time soon. I’ll stick to sorting my garbage into blue bins after a hard day’s night and let my brain go green naturally while the times they are ‘a changin’. Some intellectual data is worth saving and the rest will continue blowin’ in the wind. My brain functions are out of my hands.

Wouldn’t it be great if we could selectively dump all our un-used/no longer used/useless/best forgotten tidbits from our brains? I’d get rid of all the phone numbers I can remember of my childhood friends to make room for all the techie stuff I can’t seem to import into my aging noggin.

Isn’t it amazing. One of my childhood friends had the phone number “6” (in the days when we had to place a call through an operator, before dial phones came to our town). Our number was 110. Those tiny numbers seem to be taking up ‘way too much room in my brain. Â Lynda Davis Follow my blog at: http://www.boomerbroadcast.net Social commentary on life from a Boomer Broad’s perspective e-mail: lyndadavis1@yahoo.ca For further insights into the Boomer perspective on business, fashion, mind and body, order my new book, BOOMERBROADcast. It makes a great hostess, birthday or Christmas gift. Click on this… Read more »

I don’t really care what you are writing about, Lynda, I always read you…sometimes I agree and sometimes I don’t, but I love your style, your choice of words and the way your blogs roll along so smoothly. And you keep getting better and better.

I always love your feedback – although I can’t imagine you could possibly disagree with anything I say – ha ha. Nice to know someone’s reading and appreciating it. Thanks so much. Â Lynda Davis Follow my blog at: http://www.boomerbroadcast.net Social commentary on life from a Boomer Broad’s perspective e-mail: lyndadavis1@yahoo.ca For further insights into the Boomer perspective on business, fashion, mind and body, order my new book, BOOMERBROADcast. It makes a great hostess, birthday or Christmas gift. Click on this link: http://www.lulu.comÂ  orÂ http://www.amazon.com