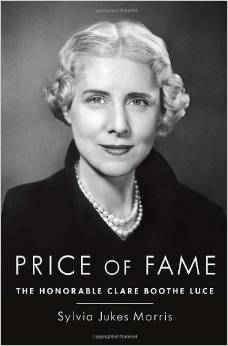 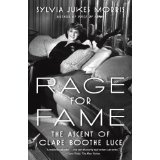 If Clare Boothe Luce had been born in 1953 instead of fifty years earlier in 1903, she would now be opposing Hillary Clinton for the job of President of the United States. Luce was a woman slightly ahead of her time but what a time she had while she was alive. I’ve just finished reading the second volume of her biography by Sylvia Jukes Morris entitled Price of Fame. I read the first volume Rage for FameÂ over the winter and previously had no idea her life had been so exciting and action-packed. For those who enjoy reading about powerful, intelligent women and are prepared to wade through twelve hundred pages of incredible detail, they’re books well worth reading. I enjoyed every single page of both. I remember seeing articles in LOOK magazine by Luce in the fifties and sixties and the regular appearance of her name and picture in various publications while I was growing up prompted me to think this was a lady whose history might be worth investigating. Early in her career as a playwright, she wrote The Women, produced in various iterations for more than seventy years now.

Clare Boothe and her brother David were the illegitimate children of an ambitious, penniless mother and a roving salesman father whose first love was playing the violin. Their fortunes took an upward turn when their mother later married a doctor who was able to improve their standard of living and introduce them to people and places previously beyond their social strata. From an early age, Clare displayed exceptional intelligence although she never achieved academic distinction. Determined to capitalize on her daughter’s combination of brains and beauty, Clare’s mother, Ann, set her sights on her daughter’s marriage to a rich husband to guarantee her passage into social status and financial security. And it worked. Her first husband, George Brokaw was a well-off alcoholic and while this early marriage didn’t last, it did produce a daughter, Ann, named after her maternal grandmother.

The author’s own summary of Clare Boothe Luce’s life entices us to want to learn more. “Here was a child actress who understudied Mary Pickford, a teenage suffragette campaigning for equal rights, a managing editor at twenty-nine of the original Vanity Fair, the author of two books and four Broadway plays, a war correspondent and a Congresswoman, all before she was forty.” Clare’s second husband was multi-millionaire Henry Luce, founder and owner of such high-profile publications as Time, Life, Newsweek and Sports Illustrated.

Although Clare Boothe Luce was an early feminist and advocate for equal rights for women, she preferred the company of men and was not always well-liked by women. She had a healthy libido and engaged in numerous affairs, often simultaneously. As a war correspondent, she traveled to Europe and Asia where she chalked up serious relationships with Generals, playboys, politicians and other high-powered men in the Pacific war zone, the European war zone, Britain and the United States.

After spending a term as Congresswoman, she was appointed by President Eisenhower as Ambassador to Italy where she was instrumental in brokering a delicate and crucial post-war agreement between Yugoslavia and Italy for control of Trieste. Despite having boundless energy, Clare suffered from regular, crippling bouts of depression and converted to Catholicism in an attempt to find inner peace. This also prompted her to experiment with LSD for several years in a further effort to achieve nirvana, finally stopping after witnessing the degenerated condition of hippie users in the Haight-Ashbury district of San Francisco in the sixties.

Never content and always ambitious, Clare constantly moved residences, rotated lovers and sought out roles that would challenge and engage her. While seemingly successful, she was rarely totally happy. Her marriage to Henry Luce was rocky, tempestuous and fragile. Both had numerous affairs but the marriage survived more than thirty years until his death.

As a retired businesswoman myself, I could relate to many of her early struggles with misogyny and subtle chauvinism. The recurring argument that women are unsuitable for promotion or leadership positions because they’ll “just get pregnant and be off the job” or they’re too emotional was then a common argument against promoting women in business or politics. Clare Boothe Luce encountered such attitudes and had a sharp response when she was considered unfit to run for the Vice-Presidency. “I myself have seen three Congressmen who have wept tears of ‘feminine’ rage, or pouted in ‘girlish’ pique over some small personal affront sustained on the floor from a colleague. During the war, I was privy to the prima donna outbursts of two generals, one who felt he had been ‘outranked’ and had been given orders he didn’t personally like; the other who had failed to get ‘good reviews’ in the home press for his great generalship. I have seen not a few tycoons in office tantrums a ten-year-old girl would be ashamed to throw. Indeed, I have witnessed dozens of examples among politicians, diplomats, and soldiers of behaviour so outrageously irrational and emotionally unstable that my ‘womanly impulse’ was to shake or spank them.” Don’t ‘ya just love that reaction! I know there are many other women in business who have witnessed similar temper tantrums and pouting by male executives that reminded us of spoiled little children.

Her approach to speaking her mind also reminded me of my own efforts at blogging my frustrations and disagreements with political or social issues. We keep plugging away even though we often feel it’s “blowin’ in the wind”.Â  In 1979, at the age of sixty-seven (the age I am now), she wrote, “I am growing weary. Everything has been writtenâ€”nothing is newâ€”everything is read, but nothing makes a lasting impression and nothing changes as a result of what is written.” She must have composed this in one of her dark moods but I can empathize. I keep banging away on BOOMERBROADcast about the lack of appropriate accommodation for retiring Boomers, the transit nightmare we endure in the Greater Toronto Area, and other issues I’ve covered in the last two years of blogging, but I’m not ready to give up. Thanks for reading my rants, and if you want to read the meticulously researched life story of a fascinating woman who was an early feminist and fellow campaigner for making the world a better place, pick up these books. She was quite a gal and both books are a wonderful read. 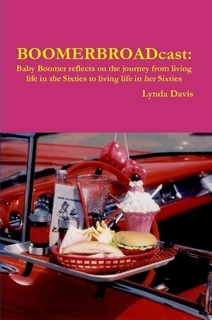 as well as just a fun read.

[…] observed in my earlier book review postings, I really enjoyed Mindy Kaling’s Why Not Me and Sylvia Jukes Morris’s two-volume biography on Clare Boothe Luce, How to Build a Girl by Caitlin Moran and numerous other books about strong, successful women. Such […]

So glad you enjoyed it. Thanks. Â Lynda Davis Follow my blog at: http://www.boomerbroadcast.net Social commentary on life from a Boomer Broad’s perspective e-mail: lyndadavis1@yahoo.ca For further insights into the Boomer perspective on business, fashion, mind and body, order my new book, BOOMERBROADcast. It makes a great hostess, birthday or Christmas gift. Click on this link: http://www.lulu.comÂ  orÂ http://www.amazon.com

Thanks. So nice to know someone appreciates it.