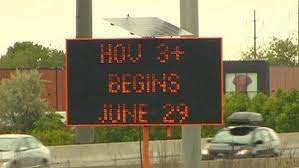 Being a good, law-abiding Canadian citizen can be very stressful at times. As a fairly typical Canadian I take pride in playing by the rules and obeying the law. I never drive in the outside lane unless overtaking another car; I never unlawfully rip the tags off mattresses; I waited until I was a bona-fide senior citizen before buying seniors’ movie tickets, and I never photocopy money. So you can understand how difficult it is for me to witness the blatant disregard for the rules of the HOV (high occupancy vehicle) driving lanes in the Greater Toronto Area for the time around the Pan Am Games.

Today, I made my last trip into the City of Toronto until after the games are over and the visitors have left town. Toronto traffic is a nightmare at the best of times and now that the Games’ people have thoughtfully requisitioned one lane of traffic on most major arteries dedicated to their own vehicles (so the rest of the world won’t see what a disaster Toronto’s transportation networks really are), it will be impossible to get anywhere in less than two or three times the dead-slow times normally allotted.Â  I experienced it first hand today, and because of my advanced age and fragile mental health, I’m not going anywhere near the city for the next six weeks.

If you would like to see the top of my head blow off from volcanic blood pressure levels, simply plant yourself in the passenger seat of my car as I’m heading east on the Queen Elizabeth Way and Gardiner “Expressway” into the city. The regular three jammed lanes of traffic are reduced to two lanes with the outside third lane now dedicated to Games’ traffic which includes taxis, buses, vehicles with at least three people inside and vehicles with special Games permits.

The truly galling part of this exercise is that while thousands of law-abiding citizens sit sipping their Timmies in the two right lanes obeying the law and barely moving, hundreds of other vehicles are breaking the law and blowing past us in the HOV lane. Sitting in the lane next to the HOV lane, I observed fully sixty percent of the vehicles with only one person in the car (a large portion of them being BMWs, Mercedes or Lexusâ€”I guess money brings special privileges), about thirty percent had two people and the remaining ten percent were taxis, buses or people with the legally allowed three people in the vehicle. One BMW convertible driving illegally in the HOV lane had only a single 20-something driver in the vehicle and he was talking on his hand-held cell phone enjoying the breezes at a high speed with the top down. During the entire fifteen kilometer drive I saw only one police car and he was pulled over checking out an accident blocking the lane.

Why don’t the authorities install cameras similar to the ones at intersections that catch red-light runners, along the left HOV medians to catch cheaters? They’d make a fortune and that money would finance updating our subway system. Ka-ching, ka-ching.

Downtown Toronto will suffer greatly by not being favoured with my patronage over the next six weeks. I’m confident the economic impact on retailers alone will cause our city’s leaders to reconsider bidding on any future debacles like this again. In the meantime, if you live east of Highway 427, don’t expect to see me any time soon. I’m cranky, disillusioned and generally pissed off with the whole fiasco. Public transit in the GTA is about fifty years behind where it should be in 2015, so I can’t even rely on that.Â  So until mid-August my life is restricted to the west end and I’m not happy about it. It’s getting harder and harder to be a good citizen when so many of my fellow drivers are breaking the law and getting away with it. It’s just not the Canadian way.

Couldn’t agree with you more. It’s hard enough to get two people with similar work schedules to coordinate their lives to take advantage of the HOV, but three people, really? If you need a ride to Oakville to shop, just let me know.