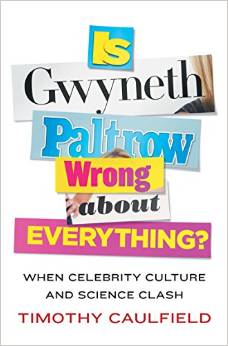 According to Amazon.ca, Canadian author Timothy Caulfield is “a professor in the Faculty of Law and the School of Public Health as well as research director of the Health Law and Science Policy Group at the University of Alberta. In recent years he has led and collaborated on a number of research projects having to do with the social challenges associated with genomic technologies, stem cell research, and the application of ethics in health sciences. He is a member of the Royal Society of Canada and the Canadian Academy of Health Sciences. He has also been involved with a number of national and international policy and research ethics committees, including Canadian Biotechnology Advisory Committee, Genome Canada’s Science Advisory Committee, and the Federal Panel on Research Ethics.” Pretty good credentials, eh!

His new book, “Is Gwyneth Paltrow Wrong About Everything” takes aim at the dangers of buying into the so-called wisdom dispensed by celebrities. It’s impossible to pick up a magazine today without being force-fed the latest information on how we too can lose weight, detox our bodies, improve our lives or otherwise achieve the nirvana that is enjoyed by Gwyneth Paltrow and others like her. A perfect example of their credibility is illustrated in the words of Britney Spears who was once quoted saying, “The cool thing about being famous is traveling. I have always wanted to travel across seas, like to Canada and stuff.” Can’t wait to take her advice on living a better life.

Caulfield presents the hard and cold facts about life as a celebrity not just for supermodels and actors but professional athletes as well. He says, “A 2009 Sports Illustrated investigation into the finances of professional athletes reported that 78 percent of former NFL players have ‘gone bankrupt or are under financial stress because of joblessness or divorce’ and “within five years of retirement, an estimated 60 percent of former NBA players are broke.” Those are pretty scary statistics. Obviously these people may have inherited valuable and marketable genetic qualities such as good looks or athletic ability but they’re a bit short on brains. What is truly frightening is the degree to which young people (and not-so-young) believe the hype. According to Caulfield’s research, a large portion of students today actually believe that the best way to achieve financial well-being is through celebrity. Looking at characters like Justin Bieber they do not believe education is needed.

And, contrary to Malcolm Gladwell’s theory that putting in your ten thousand hours of practice will qualify you as mastering a skill, that’s simply not true. There are thousands of musicians today who are far better than Ringo Starr or Miley Cyrus who will never achieve celebrity status. Hard work is simply not enough so having a Plan B is essential. Even J.K. Rowling, the wealthiest author of all time was slapped with a dose of reality when she first published The Cuckoo’s Calling under another name in 2013. Before it was revealed that she was writing under the pseudonym Robert Galbraith, the book sold fewer than five hundred copies and that was with the support of a publisher, which most writers never manage to acquire.

Fame and fortune are largely due to luck and the right combination of genetics. Caulfield cautions parents who spend ridiculous sums on modeling, singing, dancing, figure skating, hockey, and other classes for their children in hopes of achieving professional or celebrity status. The ones who do make it are extremely rare but hopefuls refuse to listen to the facts. And, parents have been proven to be the worst judges of their offspring’s intelligence, talent, and capability. Interestingly, teachers are frequently cited as being among the best, but not always.

When I began reading the book I was hoping to get to the root of what’s fact and what’s fiction when it comes to endorsements of beauty products, food fads, and diet programs”, something along the lines of Paula Begoun’s advice. It’s not a “buy this, not that” kind of summary. Caulfield’s book includes an impressive amount of science and research to back it up and the author personally submits to many of the beauty regimes and detox/diet programs touted by the stars. Thanks to their publicists, most photos depicting the truly unhealthy lives of celebrities are withheld from popular media. In fact, a large number of them are smokers, bulimics, drug addicts, and indulge in various decidedly unhealthy practices. The first chapter roundly debunks the preachings of Gwyneth Paltrow and others like her. The one that was most interesting for me was Chapter Two entitled Beauty Tips from Beautiful People. But you have to read it for yourself. There’s even a whole chapter dedicated to Pamela Anderson’s breasts which depending on your point of view I could have taken a pass on but you might like it. That chapter and the TV program Botched which documents bad plastic surgery should make you think twice about going under the knife.

I’ve given away a lot here but there’s a lot to take in and reading the book is definitely worthwhile. We need to view celebrity culture and its influence on our everyday lives with a strong degree of caution. People like Jenny McCarthy have a lot to answer for. If I had access to the information in this book a few years ago, I would now not be the owner of a library of useless health and diet books. Nor would I have wasted a small fortune over the years on beauty products that serve only to plump up the wallets of international cosmetics giants. My mother knew what she was doing with her Dove soap and Nivea creme. When a celebrity endorses something, be very sure to do your due diligence before opening your wallet. You’ll be healthier, wealthier and wiser. Now I just have to take my own advice.

Big chemical companies are killing us slowly with their secrets - BoomerBroadcast

[…] years ago I published a review of the book Is Gwyneth Paltrow Wrong About Everything? by Timothy Caulfield, who is a professor in the Faculty of Law and the School of Public Health as well as research […]

I enjoy your diversity of topics, Lynda…sometimes topics I wouldn’t have thought would be interesting.
And I continue to appreciate your writing style.