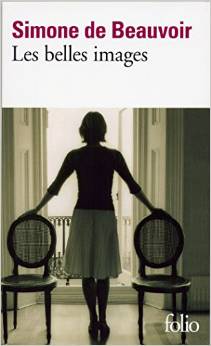 Attempting to review a book by Simone de Beauvoir means I must be either supremely stupid or incredibly naÃ¯ve. I guess I’m a bit of both. Another reason for my caution is a throw-back to my high school English Literature classes when our excruciatingly boring teacher would attempt to wake us up by asking, “And what do you think Shakespeare meant by that?”. I always think it’s somewhat arrogant to presume to know what any author meant unless you ask him specifically.

Two years ago I read a thoroughly enjoyable biography of Simone de Beauvoir by Deirdre Bair, an exhaustive account of her childhood and her many decades as lover and part-time partner of Jean-Paul Sartre. As early proponents of the existentialist movement in Paris, they were respected and well-known for their intellectual ideas related to social issues.

After reading her biography I was naturally curious to investigate her writing. I chose Les Belles Images because the subject matter was something I could relate to since I spent most of my career in corporate marketing. I also visited Paris in 1968 and that time period has special memories for most Boomers, regardless of where we were. I ordered it from the used books section of Amazon for the amazing price of one cent plus the cost of shipping. When it arrived, I opened a musty yellowed, pencil-annotated paperback edition from 1968.

The story centers around the life of Laurence, a troubled thirty-something advertising executive in 1960s Paris, who is the mother of two young daughters and is married to Jean-Charles, her arrogant architect husband. Laurence’s life is complicated by having a lover, Lucien who has outlived his usefulness, and a high-powered interior-decorator mother, Dominique, whose fifty-eight-year-old lover has just abandoned her to marry the nineteen-year-old daughter of a friend. Laurence is a worrier. Like many parents who want to prolong their children’s belief in Santa Claus for as long as possible, she is preoccupied with keeping her daughters forever innocent. She carefully monitors their friendships and forbids them to read newspapers or watch television news for fear they will be traumatized and unable to mentally cope with all the violence the world presents.

There were minor issues with the translation that made the book awkward to read at times with old-fashioned word sequences like “He was much upset” and “They shan’t do what they’ve done”. De Beauvoir’s narrative continually slips back and forth between first and third person which also makes for a tricky read; I had to keep adjusting my perspective.

Les Belles Images is an observation of Parisian life in the mid-sixties as lived by upper class professionals who appear to be unabashedly self-involved and superficial. Their struggles are not terribly different from those experienced by today’s double-income working couples. They’re living in their “now” and within the context of their own lives are subject to the same stresses and rewards as contemporary working couples. De Beauvoir has taken a minor soap opera and used it to illustrate her perception of social issues. I guess I need to talk this over with people a lot smarter than I am to understand why this writing is significant. But it was rather fun glimpsing into daily life in 1960s Paris without having to analyse “what she meant“.